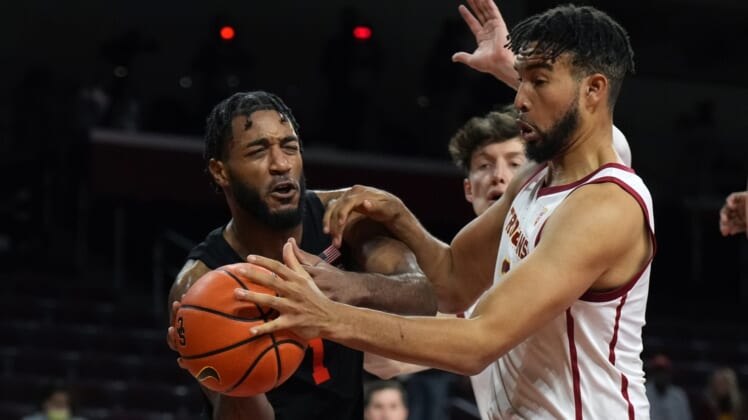 Chevez Goodwin amassed 20 points and 12 rebounds and Drew Peterson added 17 points as No. 5 Southern California got back on track Thursday by rallying for an 81-71 victory over Oregon State at Los Angeles.

Boogie Ellis scored 14 points and Isaiah Mobley had 11 as the Trojans (14-1, 4-1 Pac-12) rebounded from their first loss of the season Tuesday at Stanford.

USC held Oregon State scoreless over the final 3:54 after overcoming multiple nine-point deficits in the first half and a 10-point difference in the second half.

Los Angeles-area native Jarod Lucas scored a career-high 27 points and Warith Alatishe added 15 points and eight rebounds for Oregon State (3-12, 1-4). The Beavers were coming off a 78-76 to rival Oregon on Monday.

Thursday’s game was a matchup between a pair of teams that advanced to last year’s Elite Eight of the NCAA Tournament. Oregon State started this season 1-10 but has been much improved of late thanks to an aggressive defense that held the Trojans to 38.7 percent shooting from the field in the first half.

USC rallied to tie the game 37-all with 1:22 remaining in the first half before Oregon State went on a 5-0 run to lead 42-37 at the break. The Beavers were on top 51-41 just over three minutes into the second half.

The turning point for USC came as they trailed 71-70 with 3:41 remaining. Alatishe fouled out and Mobley hit two free throws to spark a personal 6-0 run and give the Trojans a 76-71 lead with 2:08 remaining. USC scored the last 11 points of the game.

The game was played only in front of a handful of fans who were invited guests of both programs after Los Angeles County increased restrictions because of the recent COVID-19 outbreak.