No. 5 UCLA turns to defense to beat Cal 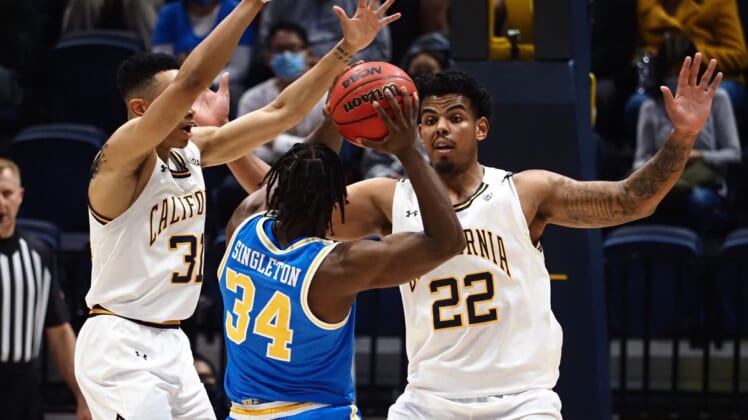 The Bruins (10-1, 2-0 Pac-12 Conference) — playing their first league game since Dec. 1 and first Pac-12 road game this season — did not give up a made 3-pointer throughout the second half.

UCLA also forced 15 Cal turnovers, which the Bruins converted into 17 points, helping to overcome the team’s lowest-scoring performance of the season.

Campbell and Jaquez buoyed the Bruins through the night, starting early. They combined for 21 of UCLA’s 31 first-half points.

Jules Bernard went 0-of-6 from the floor and finished with four points after scoring 22 points on Thursday. He contributed on Saturday with a team-high seven rebounds, a blocked shot and a steal.

Johnny Juzang scored nine points, but shot just 3-of-10 from the field and 1-of-4 from 3-point range. Cody Riley, who on Thursday made his return from a sprained MCL sustained in the Nov. 9 season opener, scored nine points on 3-of-8 shooting.

David Singleton went 3-of-3 off the bench for seven points.

Jordan Shepherd, the only other Golden Bear to score in double-figures with 10 points, shot 4-of-14 from the floor. UCLA held Grant Anticevich to two points on 1-of-11 shooting and 0-of-6 from 3-point range.

Saturday was UCLA’s second game in three days after having last played Dec. 11 due to COVID-19 pauses in both its own program and those of scheduled opponents.