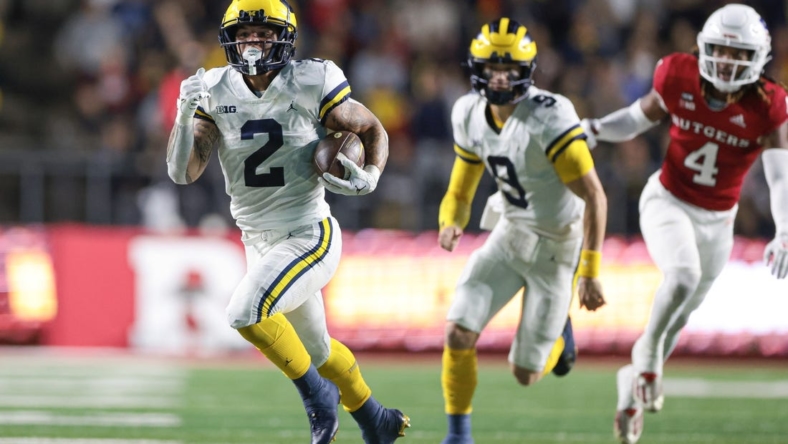 Blake Corum ran for 109 yards and two touchdowns, Donovan Edwards had 161 yards from scrimmage with a touchdown, and No. 5 Michigan used a big second half to beat Rutgers 52-17 on Saturday night in Piscataway, N.J.

Michigan linebacker Michael Barrett had two interceptions, one returned for a touchdown, and the defense held Rutgers to 14 rushing yards on 19 attempts.

Michigan struck on the game’s opening drive. Rutgers stuffed Corum on first-and-goal from the 2, then on second and third downs from the 1, before he dove in for the touchdown on fourth-and-goal.

On the Wolverines’ next possession, Rutgers’ Max Melton blocked Michigan’s punt and Timmy Ward scooped it on the run for a 7-yard touchdown. It was the Scarlet Knights’ fifth blocked punt of the year, tied for most in FBS.

McCarthy scored on a 1-yard, fourth-down sneak with 1:46 left in the quarter.

After Jude McAtamney made a 32-yard field goal early in the second to cut Rutgers’ deficit to 14-10, Jake Moody missed a 50-yard try for Michigan.

Wimsatt tossed a 3-yard touchdown to Sean Ryan in the left corner of the end zone to put Rutgers up 17-14 with 1:44 before halftime.

Moody missed from 50 yards again at the end of the half, but things soon broke in Michigan’s favor with three touchdowns in a 102-second span.

McCarthy hit Edwards in the back of the end zone for a 14-yard touchdown with 8:24 left in the third quarter. Barrett then intercepted Wimsatt and returned the ball to the Rutgers 10, a distance Corum covered in two runs en route to his 16th touchdown of the year.

On Rutgers’ very next play, Wimsatt’s pass caromed off Aron Cruickshank’s hand and right to Barrett, who charged ahead 31 yards for the pick-6.

Following Wimsatt’s third pick of the quarter, McCarthy hooked up with Cornelius Johnson for a 6-yard touchdown with 23 seconds left in the frame.

That was enough for Michigan to sail to victory. Moody added a 29-yard field goal and Isaiah Gash ran in a touchdown during the fourth quarter.