No. 5 Kentucky gets past Vandy, reaches SEC tourney semis 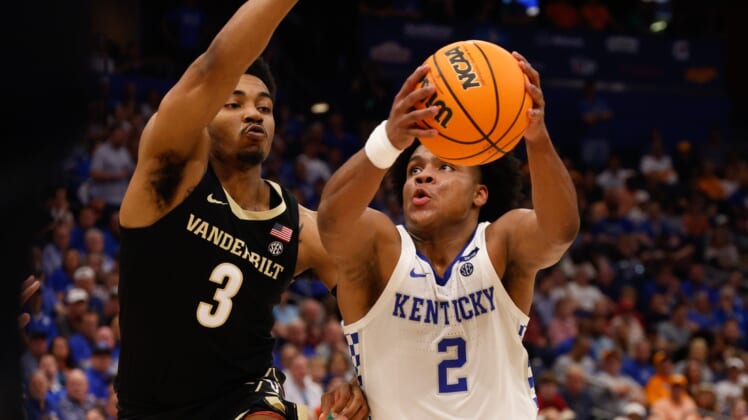 TyTy Washington scored 25 points, including two key 3-pointers late in the second half, and Oscar Tshiebwe notched 12 points and 14 rebounds to lift Kentucky to a 77-71 win against Vanderbilt on Friday in a Southeastern Conference tournament quarterfinal game in Tampa.

The fifth-ranked Wildcats (26-6), seeded third in this tournament, advanced to face second-seeded Tennessee in a semifinal on Saturday afternoon.

Eleventh-seeded Vanderbilt, which topped Georgia and Alabama to begin tournament play, fell to 17-16 as its three-game winning streak ended.

Kentucky emerged in a game of runs to win for the fifth time in six games. Struggling from the floor around the midway point of the second half, the Wildcats regrouped and reeled off a 10-2 run to go ahead by nine with 4:32 left. Washington punctuated the sequence with eight points in just over two minutes.

Vanderbilt’s Jordan Wright led all scorers with 27 points on 10-for-12 shooting. Myles Stute (11 points) and Scotty Pippen Jr. (10) followed in double figures, but Pippen was frustrated from the floor, going 2 for 17.

After surrendering the first basket of the second half, the Commodores responded with 13-0 run to take a 46-39 lead with 16:36 remaining.

Kentucky regrouped thanks to the usual suspects. Tshiebwe secured his 14th successive double-double, his 26th this season, with 13:53 to go, converting a layup to put the Wildcats ahead 48-47.

With 12:35 left, referees whistled Vanderbilt coach Jerry Stackhouse for a technical foul as he argued a no-call of an apparent shot clock violation against his own team. With no whistle, Washington scored on the fast break, incensing Stackhouse. The play was part of a 15-1 run that put Kentucky ahead by eight.

Kentucky used a 5-0 spurt in the final minute of the first half to take a 37-33 lead into the break. Washington and Mintz paced the Wildcats with eight points apiece, while Stute had eight for the Commodores in the opening 20 minutes.