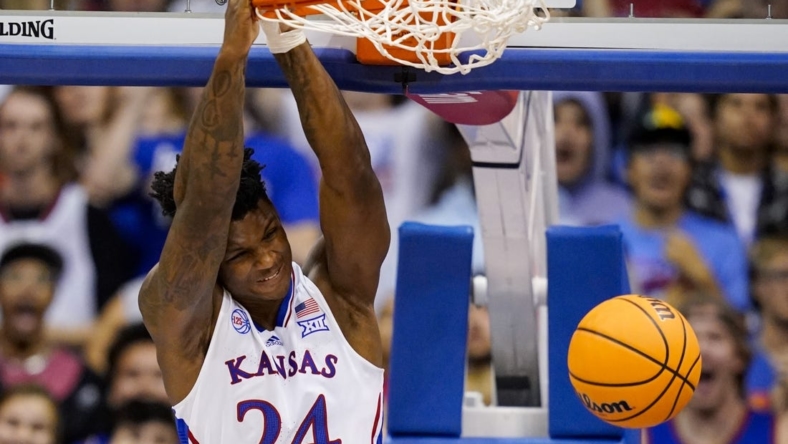 Wilson finished the first half with 17 points on 6-of-8 shooting, including 3-of-4 from long range. He led the Jayhawks with 21 points for the game, though he sat much of the second half.

After a sluggish start in their season opener over Omaha on Monday, the Jayhawks (2-0) showed the advantage in athleticism with five first-half alley-oop dunks.

North Dakota State (0-2) played the second half even with the Jayhawks, but Kansas never led by less than the final margin of 23 in the second half. They led by as many as 34 points at 68-34. They also got scoring from 11 different players.

Kansas was Self-less for the second straight game, as head coach Bill Self served the second game of a four-game suspension imposed by the university related to an NCAA investigation into potential violations tied to KU’s relationship with Adidas. Norm Roberts is serving as interim coach.

Besides Wilson, who finished two points shy of his career high, Kansas got 12 points from Gradey Dick and 10 from MJ Rice.

North Dakota State relied heavily on the three-point shot. They took 32 of their 58 shots (nine of 21 makes) from behind the arc, including 20 of their 28 shots (five of seven makes) in the first half.

They were led by Grant Nelson with 11 points and Boden Skunberg with 10.

The Bison didn’t hit a field goal inside the arc until the 8:11 mark of the first half. The layup by Skunberg cut the Kansas lead to 26-11.