No. 5 Iowa Hawkeyes keeping focus tight with Kent State up next 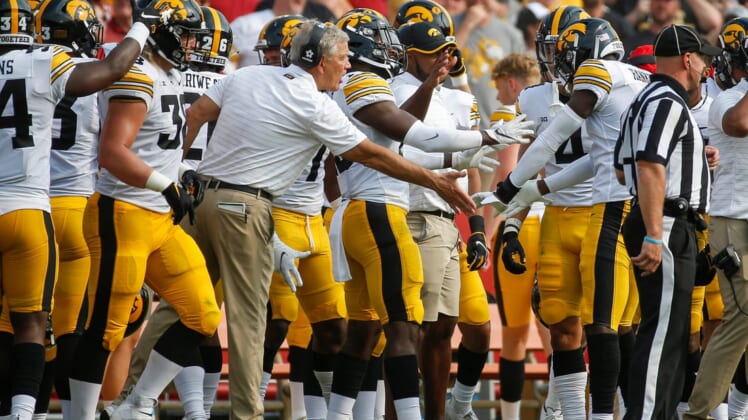 Iowa aims for a ninth consecutive victory when the No. 5 Hawkeyes host Kent State on Saturday.

Propelled up the Top 25 rankings by another dominant showing at Iowa State last week, the Hawkeyes are flexing their muscles on defense and showing signs of a strong running game.

Iowa (2-0) opened last season with two consecutive losses, then won its final six games. The Hawkeyes have looked even more determined in 2021, following a 34-6 rout of then-No. 17 Indiana on Sept. 4 with last weekend’s 27-17 road win over then-No. 9 Iowa State.

“The best we could be is 2-0,” said quarterback Spencer Petras, who has thrown for 1,339 yards with nine touchdowns and two interceptions over the last eight games, according to hawkeyesports.com. “I’m proud of this team so far.”

Though Petras and the Hawkeyes’ offense have totaled just 476 yards, it’s been serviceable through two games. However, Iowa’s defense has been the talk of the program’s early-season success. The Hawkeyes have yielded just 164 rushing yards, forced seven turnovers (six interceptions) and scored three defensive touchdowns.

One of those scores came on Jack Campbell’s 6-yard return of a fumble. The junior linebacker has posted 14 tackles and a half sack in 2021.

“He’s played a lot of good football for us,” Iowa coach Kirk Ferentz said. “He’s got a tremendous attitude and work ethic. He’s got good physical skill, too. We’re really happy for him.”

This will be Iowa’s first meeting with Kent State since a 39-7 victory in September 2004. The Hawkeyes have won five straight contests against teams from the Mid-American Conference dating to a 30-27 loss versus Northern Illinois in August 2013.

Kent State has intercepted four passes in each of its first two games, and its eight total turnovers are second in the nation to Boise State (11).

“The thing that keeps standing out to me is the way we keep turning over offenses,” Kent State coach Sean Lewis said.

“(The defense) is creating an identity and a mindset that when the ball’s in the air, it’s ours. There’s an opportunity to go get it – and they’re doing that.”

Amid his fifth season at Kent, quarterback Dustin Crum has thrown for 4,483 yards with 36 touchdowns and just eight interceptions over 39 career games. However, he was just 12-of-26 for 89 yards with two interceptions against Texas A&M.

In Crum’s last three games against ranked opponents, he’s thrown for 315 yards with a touchdown and two interceptions. Since the start of the 2002 season, Kent State has been outscored by an average margin of 41.1 points while going 0-10 against top-10 teams.