No. 5 Gonzaga bounces back to defeat Merrimack 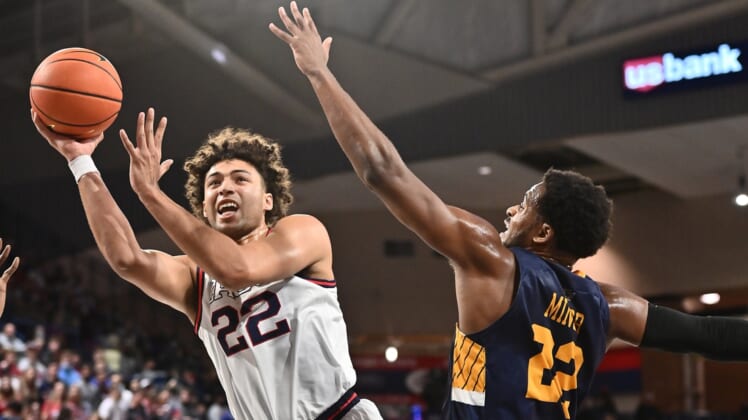 Preseason All-American Drew Timme scored a game-high 22 points on 8-for-8 shooting from the field as No. 5 Gonzaga defeated visiting Merrimack 80-55 in a nonconference game Thursday night in Spokane, Wash.

Freshman 7-footer Chet Holmgren, considered a potential No. 1 overall pick in the next NBA draft, had a double-double with 15 points and 15 rebounds and added four blocked shots for Gonzaga. Julian Strawther also had 15 points.

Jordan Minor led Merrimack (4-7) with 17 points and seven rebounds and Ziggy Reid added 16, making four 3-pointers. The Warriors will continue their trip with another big-name school, playing Sunday at Indiana.

Timme made all seven of his shots from the field and all six free-throw attempts in the first half, scoring 20 points as the Bulldogs built a 42-31 lead.

Gonzaga opened the game with a 6-0 run, sparked by a Timme layup 19 seconds in, and was never caught.

The Bulldogs led 30-24 with 4:08 left in the first half when they went on an 8-0 run. Timme scored four points during the spurt, on two free throws and a layup. Rasir Bolton’s pull-up jumper made it 38-24 with 1:57 before the intermission.

The Zags went 0 for 6 from 3-point range in the first half, but opened the second half with another 8-0 run, helped by 3-pointers by Holmgren and Strawther, and later added a 10-0 spurt.

The Bulldogs enjoyed a 56-20 rebounding edge, turning that into a 20-9 edge in second-chance points. The Bulldogs also had a 17-4 advantage in fast-break points. Anton Watson added 10 boards and Timme and Bolton each had seven.