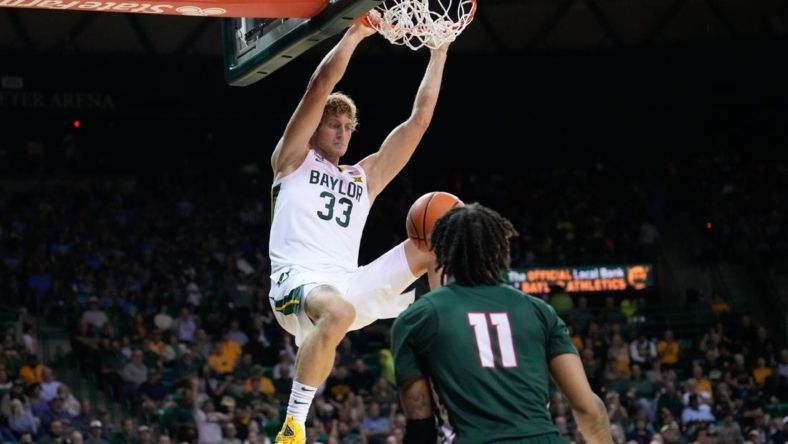 Adam Flagler hit for 21 points to lead a balanced offensive attack as No. 5 Baylor walloped visiting Mississippi Valley State 117-53 in Waco, Texas, on Monday on college basketball’s opening day of the season.

Baylor (1-0) led by 40 points after a dominating first half and strolled through the second half, forcing Mississippi Valley State into 25 turnovers that led to 35 points. The Bears shot 51.4 percent and enjoyed a 53-29 edge in rebounding, including a 22-9 advantage on the offensive glass.

The Bears never trailed, scoring 13 of the game’s first 15 points and then using a 24-0 run over a five-minute stretch of the first half to put the contest to bed before halftime. Baylor led 40-10 at the 5:44 mark after a 3-pointer by Bonner but didn’t let up, eventually taking a 61-21 lead to the break when Flagler hit a final-second layup.

Ten players saw the court for the Bears in the first 20 minutes of play and they all scored, led by Flagler’s 12 points, 11 by Bridges and 10 from Bonner. Baylor made 19 field goals to just four for Mississippi Valley State in the half and was 7-of-16 shooting from beyond the arc despite missing its first seven attempts.

Collins paced the Delta Devils with eight points in the first half, when Mississippi Valley State shot just 19.0 percent and had 14 turnovers.

The Bears were a little ragged to start the second half, missing six of their first eight shots over the first 4:30 but were still able to expand their lead to 41 points. A 16-0 spurt through the middle of the half, in which George scored eight points, pushed the Baylor lead to 98-37, after which it was just a matter of how many points the Bears wanted to win by.