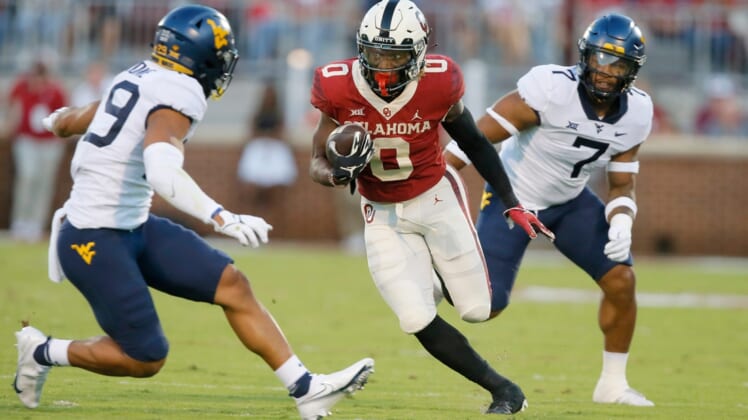 Gabe Brkic hit a 30-yard field goal as time expired to help No. 4 Oklahoma escape with a 16-13 home win over West Virginia on Saturday night.

The Sooners’ offense struggled most of the night but came up big in the final four minutes, driving from their own 8 to the Mountaineers’ 12 to set up Brkic’s game-winner.

The Mountaineers were once again turned away in their quest for win No. 1 over Oklahoma since the two became conference opponents.

OU quarterback Spencer Rattler was 6 of 6 for 54 yards on the final drive, finishing 26 of 36 for 256 yards and a touchdown.

But West Virginia’s offense struggled as well, finishing with just 226 yards, 47 on the ground.

Bryce Ford-Wheaton finished with eight catches for 93 yards for the Mountaineers (2-2, 0-1).

With just more than five minutes remaining, West Virginia was driving with a chance to take the lead.

The Mountaineers were inside the Sooners’ 30 when disaster struck for center Zach Frazier.

First, Frazier was called for an illegal snap for hesitating after beginning his snapping motion, pushing West Virginia back five yards. Then, as quarterback Jarret Doege looked to the sidelines, Frazier’s long snap whizzed past the Mountaineers’ quarterback. Doege was in a race with Oklahoma linebacker Nik Bonitto, finally beating the defender there but losing 21 yards in the process.

The Mountaineers had to punt two plays later, giving the Sooners the ball at their own 8 with 3:39 remaining.

West Virginia started the game with a 17-play drive that ate up more than nine minutes of clock, converting on third down three times and fourth down once before Garrett Greene’s 2-yard touchdown run.

The Sooners answered with a much quicker touchdown drive.

But from there, the defenses took over, with the only score the rest of the first half coming on Casey Legg’s 25-yard field goal on the final play of the half to give WVU the lead, 10-7.

The Sooners have been known for their explosive offenses under Riley. But frustration among Oklahoma fans bubbled up after West Virginia’s Jackie Mathews dove to intercept Rattler’s pass in the second quarter. As the Oklahoma offense left the field, chants of “We want Caleb” — Sooners’ true freshman backup QB Caleb Williams — filtered down from the crowd of more than 84,000.

The Sooners managed just 91 yards of total offense in the first half.