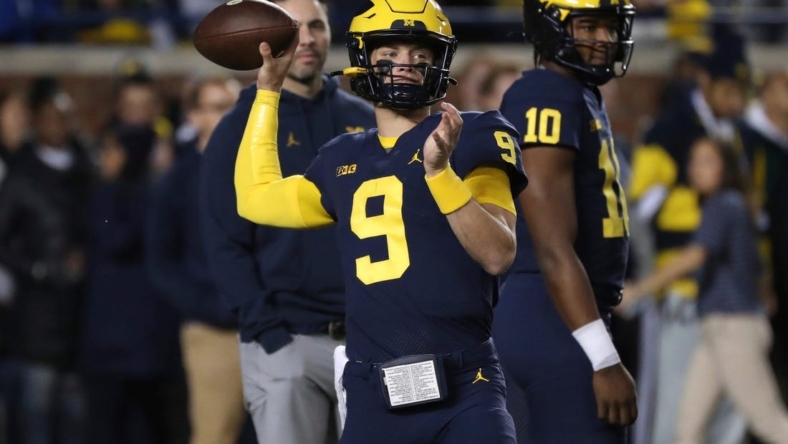 The Wolverines outgained the Spartans 276-37 on the ground.

Michigan State (3-5, 1-4) had won the last two meetings against its in-state rival.

Payton Thorne passed for 215 yards, with one touchdown and an interception. Keon Coleman caught five passes for 155 yards and scored the team’s lone touchdown.

The Wolverines led 13-7 at halftime.

Michigan State coach Mel Tucker gambled on a fourth-and-1 from his own 46 in the first quarter but Elijah Collins was stopped for no gain.

The Wolverines took advantage of the short field, as Moody kicked a 22-yard field goal. Donovan Edwards had a 28-yard reception during the drive.

Thorne got into a rhythm during the ensuing possession. He connected with Coleman on a 29-yard completion, then hooked up with him again on a 26-yard score with 23 seconds left in the quarter.

Michigan responded with an eight-play, 80-yard drive capped off by McCarthy’s 2-yard pass to Corum, who caught the flip in motion.

The Spartans drove inside Michigan’s 10 on its next drive but once again failed to convert a fourth down, as Jalen Berger was stopped for a 2-yard loss.

The Wolverines had an 86-yard drive before halftime but had to settle for a 25-yard Moody field goal.

Michigan got the ball first in the second half and the possession once again ended in a Moody field goal, this time from 39 yards out.

A special teams gaffe — a high snap that led to punter Bryce Baringer getting tackled inside his own 10 — led to Corum’s 4-yard touchdown run with 12:47 left.