No. 4 Gonzaga eases past North Alabama in 30-point romp 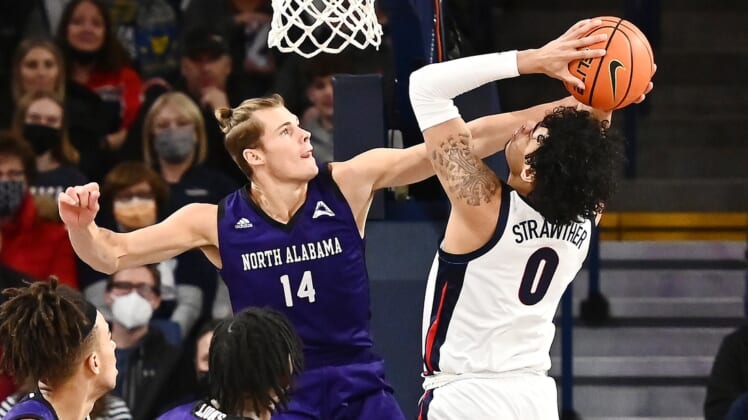 It was the final tuneup before West Coast Conference play begins for the Bulldogs (11-2), who extended their program-record home winning streak to 59 games.

Just a couple of hours before tip-off, Gonzaga learned its WCC opener Thursday at San Diego had been postponed because of a COVID-19 outbreak in the Toreros program. That means the Zags aren’t scheduled to play again until Saturday at Loyola Marymount.

Rasir Bolton scored 14 points for the Zags, Nolan Hickman had 13, Drew Timme tallied 12 and Anton Watson came off the bench and had a double-double with 10 points and 10 rebounds.

The Lions (7-6) were led by senior guard C.J. Brim, who scored a career-high 15 points. It was also North Alabama’s final non-conference game before beginning ASUN play next Tuesday at Lipscomb.

Gonzaga led just 25-19 after the Lions’ Dallas Howell made a 3-pointer with 8:19 remaining in the first half. But the Zags put together a 14-0 run to pull away.

Andrew Nembhard missed the second of two free-throw attempts but Strawther tracked down the rebound and made a 3-pointer from the left corner.

Chet Holmgren followed with a nifty spin move along the baseline and finished with a dunk to electrify the matinee audience. Strawther made a driving layup while being fouled and converted the three-point play before Bolton pulled up on the fast break and made a 3-pointer.

Holmgren capped the run with a second-chance layup after a North Alabama turnover to extend the lead to 20.

This was the second meeting between the programs. Gonzaga defeated the visiting Lions 96-51 on Dec. 28, 2018, three years earlier to the day.