No. 3 Purdue tries to extend home dominance over No. 24 Wisconsin 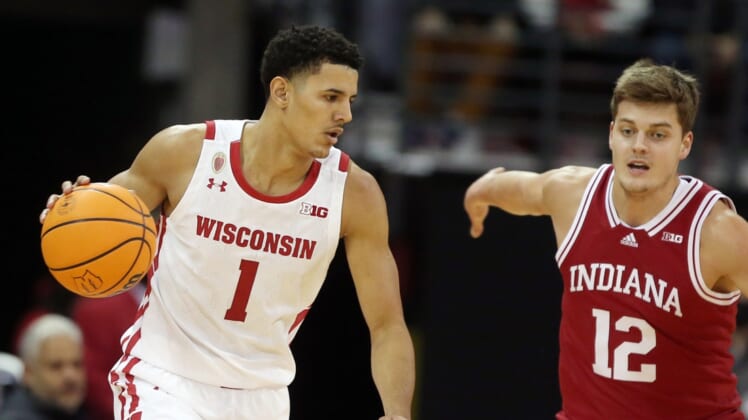 After wrapping up a perfect nonconference slate, third-ranked Purdue returns to Big Ten Conference play with a definite homecourt advantage when the Boilermakers host No. 24 Wisconsin on Monday at West Lafayette, Ind.

The Boilermakers closed out their nonconference schedule with a 104-90 victory over Nicholls on Wednesday, taking control with a 20-0 run in the first half to improve to 8-0 at home this season. Zach Eddy scored 21 points on 7-of-8 shooting, adding five rebounds and two blocks in just 16 minutes. Jaden Ivey had 19 points and Isaiah Thompson added 15 as the Boilermakers shot 57 percent.

“They were making some tough shots. It just depends how you look at it with some of the breakdowns we had,” Purdue coach Matt Painter said. “They took advantage of us when we didn’t break down. I asked our team afterwards, if the ball is not going in for us, how does this game unfold? We probably lose that game. Obviously, we shot the ball well and were able to go inside.”

Wisconsin (10-2, 1-1), playing for the first time in two weeks due to a COVD-cancellation, staved off a furious rally to turn back Illinois State 89-85 at home on Wednesday after leading by 17 early in the second half. The Badgers were missing five reserves due to health and safety protocol.

Steven Crowl had a career-high 21 points, making 7 of 8 shots, along with nine rebounds, and Johnny Davis added 20 points and 11 rebounds, despite 6-of-23 shooting.

“Well, if you liked offense, it was a good one to come to,” Wisconsin coach Greg Gard said. “If you like defense, you’re probably going home not as pleased. Credit Illinois State, we knew they obviously could score in bunches. I thought we were sporadic on both ends of the floor. It looked like we hadn’t played in 14 days.”

Wisconsin also played Nicholls, overcoming a 12-point second half deficit for a 71-68 homecourt victory on Dec. 15, despite the absence of Davis, out with a non-COVID illness. The Badgers had their Dec. 23 game canceled due to COVID issues in the program.

Ivey leads the Boilermakers with 16.7 points per game, with Edey at 14.9 points and 7.3 rebounds in just 17.5 minutes per contest, and Trevion Williams adds 13.3 points and 9.1 boards. The 7-foot-4 Edey presents a challenge for Crowl and 7-0 grad transfer Chris Vogt, who each have been foul prone at times.

Purdue’s only loss was 70-68 at Rutgers on Dec. 8 that dropped the Boilermakers from the top spot in the Associated Press Top 25. Purdue has won seven of the last 10 matchups with Wisconsin, including a 73-69 victory at home last season behind Edey’s 21 points.

Despite the common opponent, Painter said he couldn’t draw much from Wisconsin’s game vs. Nicholls because of Davis’ absence. Davis also did not play in the Badgers 63-58 loss at home to Providence in mid-November.

“When he’s in there, he’s going, man,” Painter said. “He’s tough to beat. Not to say they’re not a good team without him, because they are, but they could end up being a special team with him.”