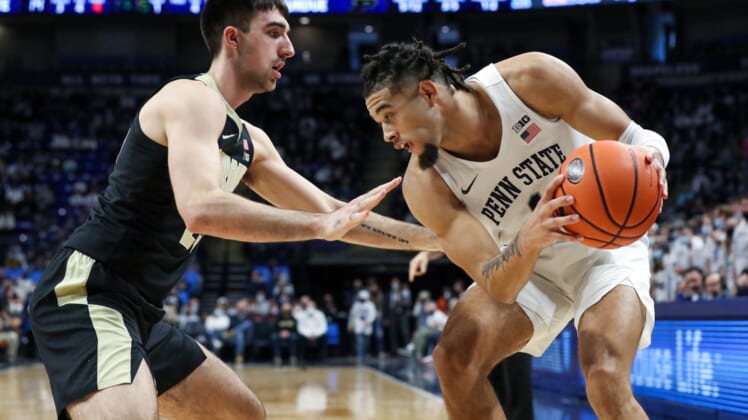 Trevion Williams scored 21 points and grabbed nine rebounds as No. 3 Purdue battled pesky Penn State down the stretch before emerging with a 74-67 road victory Saturday afternoon at University Park, Pa.

Mason Gillis pitched in a career-high 14 points for the Boilermakers (13-2, 2-2 Big Ten), who also received 13 points from Sasha Stefanovic and 12 points from Jaden Ivey. Purdue has won 12 of the past 13 matchups in the series.

Jalen Pickett registered 21 points to lead Penn State (7-6, 2-3), which took the lead after trailing by 13 in the second half. However, the Nittany Lions did not score over the final two minutes as their mini two-game winning streak came to an end.

Purdue’s biggest lead came at 51-38 with about 12 minutes remaining, but Dallion Johnson, Pickett and Seth Lundy drained 3-pointers in a three-minute stretch to get Penn State within 53-47.

A three-point play by Williams and a 3-pointer by Gillis helped extend the Boilermakers’ lead back to eight with under seven minutes left. However, Penn State made another surge, hitting three 3-pointers in 1 1/2 minutes to get within 62-60.

Purdue responded with a 10-2 run to close the contest. Williams had an offensive rebound and a putback, and then Gillis knocked down a 3-pointer for a 69-65 cushion. Williams’ three-point play with 1:05 remaining made the score 72-67.

The Boilermakers trailed 21-14 before going on a 15-3 run that turned the scoreboard in their favor. The Nittany Lions then scored six straight to go back in front 30-29 before the visitors scored the final six points of the half, ignited by Ivey’s 3-pointer.

Pickett had 12 points and six assists in the first half to lead all players in both categories.