Lance was selected third overall in the 2021 NFL Draft, following fellow quarterbacks Trevor Lawrence (Jacksonville Jaguars) and Zach Wilson (New York Jets) off the board. Wilson is the lone unsigned first-round pick of the past draft.

Although Lance was selected with a high pick, coach Kyle Shanahan told reporters that veteran Jimmy Garoppolo will be atop the depth chart as training camp opens.

“There’s no open competition, where they’re getting equal reps with the same group,” Shanahan said Tuesday. “Jimmy’s coming in as the 1, Trey as the 2.” 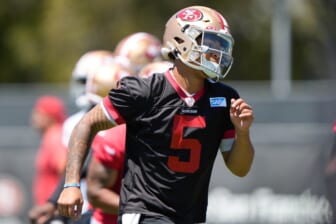 Lance brings to the 49ers a resume that includes 19 college games at FCS program North Dakota State. All but three of those games were in 2019, when Lance threw for 2,786 yards, 28 touchdowns and zero interceptions, while running for 1,110 yards and 14 touchdowns. He led the Bison to a 28-20 win over James Madison in the FCS title game after the 2019 season.

Garoppolo, 29, is 22-8 as the 49ers starter in the regular season but injuries — a torn ACL, a sprained throwing shoulder and two high ankle sprains — have limited the quarterback. Acquired from the New England Patriots on Oct. 31, 2017, for a 2018 second-round draft pick, Garoppolo started just 25 games over the past three seasons and is entering the fourth year of a five-year, $137.5 million contract.