Ochai Agbaji scored 25 points Friday as No. 3 Kansas returned home after its win at the Champions Classic and downed Tarleton State 88-62 at Lawrence, Kan.

The Jayhawks (2-0) ran their winning streak in home openers to 49 while outmanning the scrappy Texans, who are playing just their second season at the Division I level.

Agbaji, a senior who scored a career-high 29 points as Kansas beat Michigan State to open the season Tuesday in New York, again showed veteran command. He scored off the bounce, the catch and on alley-oops while going 11 of 16 and adding six rebounds. 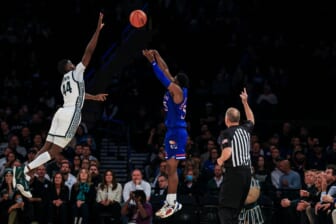 Tarleton State kept the margin to single digits four minutes into the second half before Kansas slowly pulled away behind Iowa State transfer Jalen Coleman-Lands. He finished with 10 points for the Jayhawks, who shot 58.6 percent from the floor.

Shamir Bogues and Montre Gipson carried the Texans (0-2) with 20 and 19 points, respectively. Tahj Small added 12 points. Tarleton State shot just 40.3 percent but executed well with just nine turnovers, though it could not maintain the deliberate pace it wanted.

Kansas made five straight attempts to gain a 25-12 first advantage with 9:03 left in the first half. The Jayhawks could never expand that margin before the break, when they led 39-31.

Bogues (15) and Gipson (14) contributed all but two of the Texans’ first-half points.

Tarleton State, transitioning into Division I under coach Billy Gillispie, continued to engage in a difficult schedule that also includes games against Wichita State, Michigan and Gonzaga before the Western Athletic Conference season.