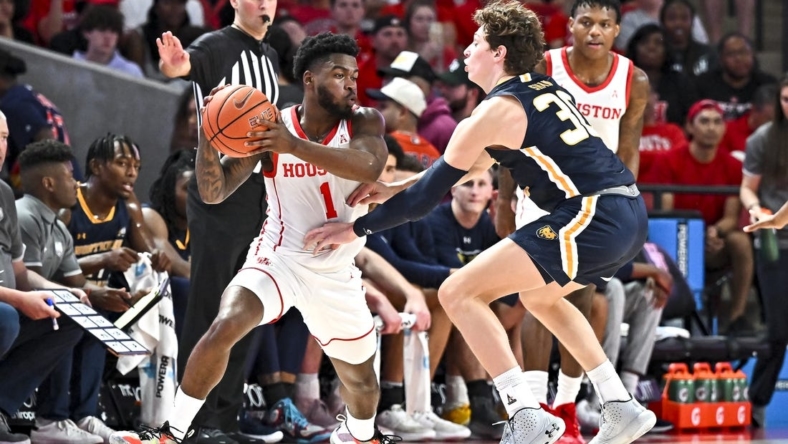 Marcus Sasser made four 3-pointers while recording 21 points and four steals to help No. 3 Houston roll to an easy 83-36 victory over visiting Northern Colorado in the season opener for both teams on Monday night.

Houston coach Kelvin Sampson picked up his 200th victory at the school. He began his ninth season with the Cougars on Monday.

Daylen Kountz, who led the Big Sky in scoring with a 21.2 average last season, had just three points on 0-of-9 shooting for the Bears.

The Cougars shot 44.4 percent from the field, including 11 of 29 from 3-point range, while leading by a comfortable margin most of the contest.

Northern Colorado, which was 5 of 21 from behind the arc, committed 23 turnovers while Houston had just eight. The Cougars had a 27-2 edge in points off turnovers.

Houston led 32-13 at halftime despite shooting just 33.3 percent from the field. The Bears were even worse at 21.1 percent.

Kountz had two first-half points but missed all six of his field-goal attempts.

His first gave Houston a 20-8 lead with 7:37 left in the half and his second increased the advantage to 16 with 2:37 remaining. Sasser’s final one came with two seconds left to provide the 19-point halftime cushion.

The Cougars ripped off the first nine points of the second half with Shead’s jumper capping the surge to make it 41-13 with 15:28 left.

Johnson answered with back-to-back 3-pointers for Northern Colorado before Houston rattled off the next 11 points. Sasser had a 3-pointer and a layup and Roberts finished the run with a fast-break layup to make it 52-19 with 11:11 remaining.