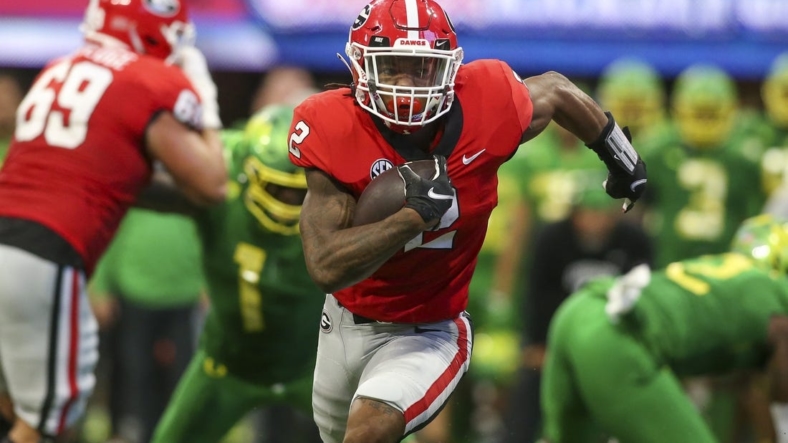 Stetson Bennett passed for 368 yards and two touchdowns and also rushed for a score as third-ranked Georgia opened defense of its national championship by routing No. 11 Oregon 49-3 Saturday in the Chick-fil-A Kickoff in Atlanta.

Oregon’s Dan Lanning, making his head-coaching debut after serving as Georgia’s co-defensive coordinator the past three seasons, had no answer for the Bulldogs’ offense, which scored touchdowns on its first seven possessions and amassed 571 yards.

Bennett, the offensive MVP of Georgia’s 33-18 victory against Alabama in last season’s College Football Playoff title game, was 18 of 21 for 254 yards a touchdown in the first half as the Bulldogs built a 28-3 lead.

Transfer Bo Nix, a three-year starter at Auburn, quarterbacked the Ducks. Nix finished 21 of 37 for 173 yards with two interceptions, both of which turned into Georgia touchdown drives.

The Bulldogs took the lead on Ladd McConkey’s 9-yard end around with 6:15 left in the first quarter.

Bennett scored on a 1-yard bootleg around the right end on the first play of the second quarter to give the Bulldogs a 14-0 lead.

The Ducks got on the board with a 35-yard field goal by Camden Lewis with 3:57 to go in the second.

Bennett scrambled before hitting McConkey with a 4-yard scoring strike with 21 seconds left before the intermission to make it 28-3.

Kendall Milton capped Georgia’s first drive of the second half with a 12-yard touchdown run to extend the lead to 35-3.

Bennett threw an 18-yard touchdown pass to Adonai Mitchell with 5:20 left in the third to make it 42-3, after which Bennett exited in favor of Carson Beck.

Beck threw an 18-yard touchdown pass to Milton on the second play of the fourth quarter to cap the scoring.