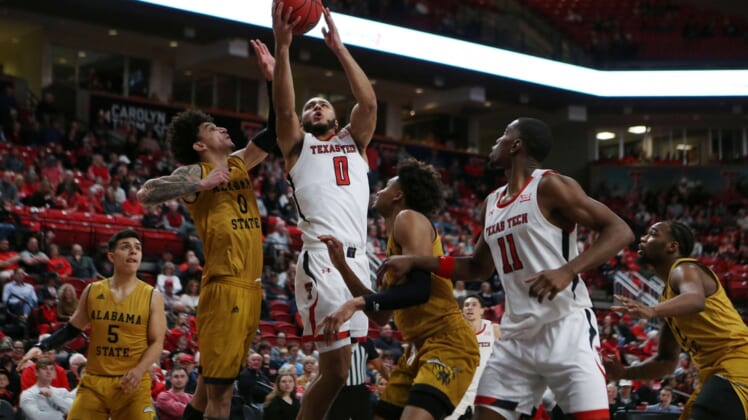 For the second time in eight days, Alabama State showed no trepidation against a ranked Big 12 Conference opponent when the Hornets tangled with 25th-ranked Texas Tech in Lubbock.

But also for the second straight outing, Alabama State’s feisty effort hit an abrupt wall, this time resulting in a 75-53 loss to the Red Raiders.

Texas Tech seized command with a game-turning first-half 19-3 spurt and never looked back in its final pre-conference test. The Red Raiders (10-2) open Big 12 play on Jan. 5 at No. 8 Iowa State after their original opener against Oklahoma State was postponed due to COVID-19 concerns.

Davion Warren led Texas Tech with 15 points — 11 in the first half — while Kevin McCullar and Adonis Arms chimed in with 11 points apiece. McCullar recorded seven assists and connected on three of the Red Raiders’ nine 3-pointers.

The Red Raiders built a 42-27 halftime lead bolstered by the 19-3 run that erased Alabama State’s slender lead throughout most of the game’s initial 8 minutes. A week earlier, the Hornets raced in front of Texas 13-2 in Austin before losing by 20 points.

To gain the upper hand in the opening 20 minutes, Texas Tech feasted on Alabama State turnovers and dominated the paint. The Red Raiders came up with 11 steals (the Hornets lost the ball 17 times in the first half, 23 times overall) and converted those takeaways into 14 points.

Tied into the turnovers were easy baskets on the opposite end and that led to a 20-0 advantage in the points in the paint category.

Alabama State had to attack from the perimeter most of the game, which was an advantage in the first half when the Hornets were 5-of-12 from 3-point range. But they cooled off after the break, missing 12-of-15 from deep.