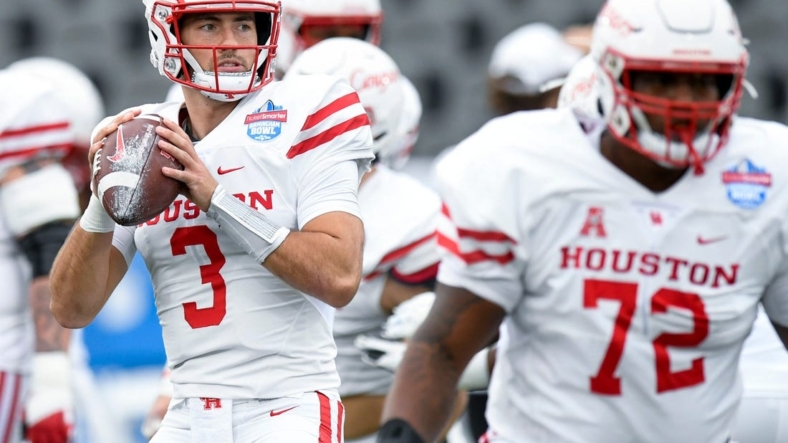 While the Red Raiders built a 32-point halftime lead against visiting Murray State and cruised to a 63-10 win, the Cougars gave up a game-tying field goal to Texas-San Antonio on the final play of regulation before prevailing 37-35 in triple overtime.

Texas Tech (1-0) and Houston (1-0) each benefited from solid quarterback play.

Red Raiders backup Donovan Smith completed 14 of 16 passes for 221 yards and four touchdowns after taking over when Tyler Shough injured his left (non-throwing) collarbone in the first quarter. Shough had completed six of his 10 passes for 154 yards and a touchdown before suffering the injury that is expected to sideline him for several weeks.

Still, the Red Raiders found the end zone on six straight possessions in the first half.

Texas Tech third-string quarterback Behren Morton was 7-of-10 passing for 97 yards with a touchdown and an interception. He’s now second string behind Smith.

“We are going to prepare for both,” Cougars coach Dana Holgorsen said. “I don’t think their offense is going to change regardless of which one is out there.”

Houston’s Clayton Tune completed 22 of 32 passes for 206 yards and three scores and ran for a team-high 51 yards and a touchdown. He also had the game-winning two-point conversion run in the third overtime. The Roadrunners failed to tie the game on their possession when their conversion pass fell incomplete.

Texas Tech outgained Murray State 605-258 and surrendered just 10 first downs, including none in the second half. Meanwhile, Houston’s defense struggled against the Roadrunners, who amassed 441 yards, including 337 through the air, and led 21-7 entering the fourth quarter before the Cougars rallied.

The Red Raiders have beaten the Cougars in each of the past four meetings and in nine of the past 10 contests, including a come-from-behind 38-21 victory in last season’s season-opening game at NRG Stadium in Houston. Texas Tech scored 31 unanswered points in the second half to rally from a 21-7 halftime deficit.

The Red Raiders will be looking to knock off a Top 25 opponent for the first time since beating No. 21 Oklahoma State in 2019.

While the teams’ meeting on Saturday is a nonconference game, it won’t be in the future as Houston prepares to jump from Conference USA to the Big 12.

“Houston, they are a Big 12 opponent,” Texas Tech coach Joey McGuire said. “This is not a Group of Five team or a lower-level team. They’re a ranked opponent, and we’re going to see each other for a long time, so this is going to be a really good test.

“This is a conference opponent, just getting to play it a year earlier. I’m excited about that.”