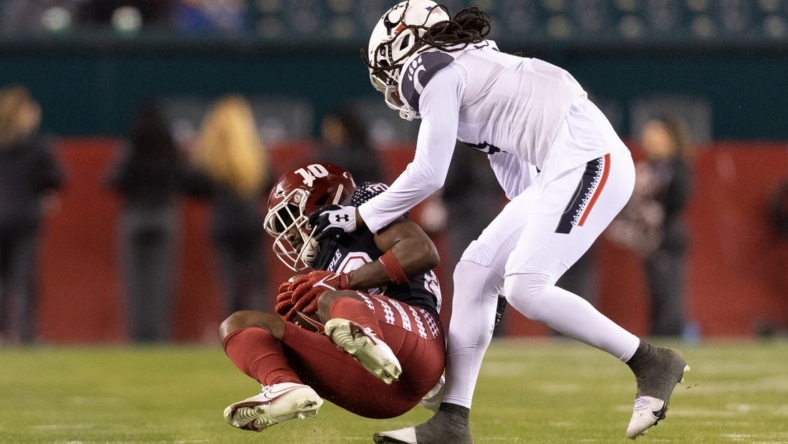 Ben Bryant and Tre Tucker hooked up for an early 42-yard touchdown pass as No. 25 Cincinnati rolled over host Temple 23-3 on Saturday in Philadelphia.

Ryan Montgomery added a TD run for the Bearcats (9-2, 6-1 American Athletic Association), who sit in a first-place tie with Tulane with one week left in the regular season.

Bryant went 9 of 18 for 130 yards without a turnover before leaving with a foot injury in the second quarter. Evan Prater came on and completed 12-of-17 passes for 127 yards while also playing turnover-free football.

Cincinnati suffocated Temple in the first half, holding the Owls to 106 total yards, including seven yards on nine rushes.

Temple punted on its first three possessions before the Bearcats opened the scoring on Bryant’s 42-yard TD bomb to Tucker, who snuck behind two defenders for the score with 1:19 to play in the first quarter.

Edward Saydee fumbled on the Owls’ next play, and the Bearcats recovered. Three plays later, Montgomery slipped through the teeth of the Temple defense for a 14-yard TD run.

Cincinnati tacked on a 28-yard field goal by Ryan Coe on its next possession to take a 17-0 lead with 9:55 remaining until halftime. About 1 1/2 minutes later, Temple got on the board with a field goal of its own — a 43-yarder by Camden Price.

Coe accounted for all the second-half scoring with a 37-yard field goal midway through the third quarter and a 24-yard boot early in the fourth.

The Owls only possessed the ball four times in the second half. Those trips ended in two punts, an interception and a fumble.