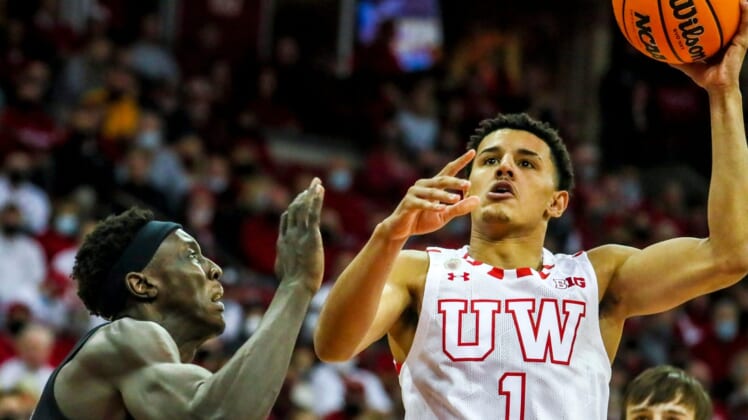 Wisconsin Badgers guard Johnny Davis drives to the basket as Marquette forward Kur Kuath defends him during the first half on Dec. 4, 2021.Mjs 12042021 Uwmen05 Ec00003

No. 24 Wisconsin’s game against George Mason on Thursday has been canceled because of positive COVID-19 tests within the Badgers’ program.

Per the Badgers’ website, the game “has been called off and will not be played.”

Wisconsin (9-2) initially was scheduled to host Morgan State on Thursday. However, the Bears bowed out that contest because of COVID-19 issues within their program.

George Mason (7-5) stepped up to play the Badgers after its scheduled game for Thursday was canceled. Coincidentally, that contest was shelved because of COVID-19 problems for the Patriots’ opponent, Baltimore-based Coppin State, the crosstown rival of fellow MEAC school Morgan State.

The Badgers have been idle since posting a 71-68 win over Nicholls on Dec. 15. Wisconsin is scheduled to return to action against visiting Illinois State on Wednesday.

In the Big East, St. John’s and Butler were the latest teams to postpone a league game due to COVID-19 protocols. As of Thursday, St. John’s did not have seven healthy players to dress for the game.

The Big East officially walked back its policy surrounding COVID-affected games for men’s and women’s basketball earlier Thursday. Rather than having teams without enough healthy players forfeit and receive a loss for their conference record, the Big East will attempt to reschedule the game.

St. John’s (8-3) and Butler (7-4) have yet to begin its conference schedule. St. John’s original Big East opener was supposed to take place Monday at No. 15 Seton Hall, but the Pirates’ own COVID outbreak led to the game being postponed.