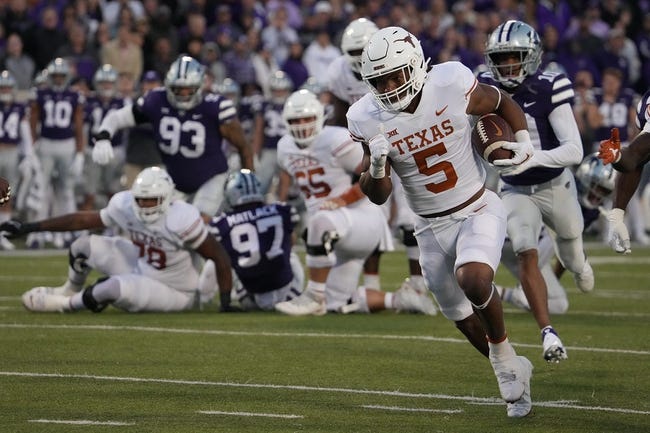 K-State’s potential game-tying drive ended with a fumble at midfield with 24 seconds left.

Texas led 31-10 at halftime before K-State cut it to one score twice.

K-State’s best cornerback, Julius Brents, was ejected from the game on a targeting call on the opening drive. The Longhorns capped the drive with a 36-yard touchdown run by Robinson.

Martinez hit Deuce Vaughn with a 28-yard touchdown pass to answer the score.

Texas marched 75 yards on eight plays to regain the lead. Roschon Johnson punched it in from the 9-yard line.

Longhorns quarterback Quinn Ewers found Xavier Worthy alone in the back of the end zone for the Longhorns’ third touchdown. Ewers finished 18-for-31 for 197 yards passing and two TDs.

Texas appeared headed to a three-score lead when Johnson broke through the line on a fourth-and-1 run, but Ekow Boye-Doe stripped the ball from behind and it was recovered by Jacob Parrish at the K-State 10. K-State failed to convert a fourth-and-2 deep in Texas territory.

The Longhorns answered with a 74-yard drive, capped by a 28-yard Bert Auburn field goal. The key play was a 68-yard run by Robinson.

Martinez then threw his first interception of the season, setting up Texas at the K-State 27. Ewers hit Worthy on a 3-yard touchdown pass with 13 seconds left in the half.

K-State took advantage of a Johnson fumble to trim the deficit early in the third quarter. Martinez punched it in from the 1-yard line. Martinez then hit Kade Warner on a 25-yard touchdown pass on the first play of the fourth quarter to cut it to 31-24.

Auburn’s 29-yard field goal made it a two-score game. Zentner answered with a 28-yarder.