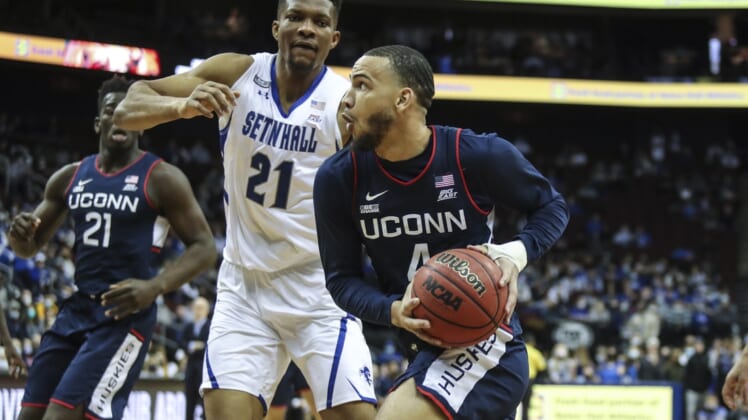 Kadary Richmond scored a career-high 27 points, including a go-ahead shot in the lane with 31 seconds left in overtime, as No. 24 Seton Hall outlasted Connecticut 90-87 in a Big East game Saturday in Newark, N.J.

Bryce Aiken had 22 points and seven assists and made two clinching free throws for the Pirates (11-3, 2-2 Big East) with one second left.

UConn (10-4, 1-2) had a chance to take the lead after the basket by Richmond, but Jared Rhoden came up with a steal and called a timeout. Rhoden, who scored 15 points, briefly had been benched by Seton Hall coach Kevin Willard earlier in the game for not challenging a 3-point attempt. Rhoden, a senior, has exactly 1,000 points in his career.

Adama Sanogo scored 18 points and grabbed 16 rebounds and R.J. Cole had 15 points for the Huskies, who hadn’t played because of COVID protocols since beating Marquette on Dec. 21. Sanogo had given UConn an 87-86 lead with 45 seconds left in overtime by making a shot over 7-foot-2 Ike Obiagu.

The first one was a stepback shot on which Seton Hall star Rhoden curiously did not come out to challenge him. Willard removed Rhoden at the next stoppage in play and he sat on the bench for 2:19 before re-entering.

Seton Hall was without Alexis Yetna, who was in uniform but sat out for precautionary reasons. Willard said in a pregame radio interview that Yetna was hit in the head by a pass in practice Friday. Seton Hall’s Tyrese Samuel (seven points) returned after missing three games because of COVID protocols.

Tray Jackson finished with 10 points for the Pirates, who shot 54.2 percent for the game.

Martin (13 points), Polley (11) and Jackson (10) scored in double figures for the Huskies, who committed 19 turnovers.