Louisiana Ragin’ Cajuns football quarterback Levi Lewis (No. 1) hands the ball to Montrell Johnson Jr. (No. 4) during pre-game warm up as the Cajuns prepare to take on Ohio on Thursday, Sept. 16, 2021.Cajuns Vs Ohio Football Pregame 5734

Now that Louisiana has become more widely recognized for its achievements, the Ragin’ Cajuns will try to build on that.

Louisiana entered the national rankings at No. 24 this week, just in time for a quick turnaround to face visiting Georgia State on Thursday night in Lafayette, La.

“Rankings are good,” Louisiana coach Billy Napier said. “I also think, ‘Let’s not lose sight of how we got here.'” 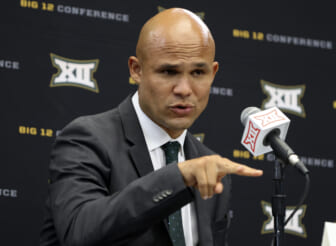 “I think it’s important that you do a lot of pre-planning,” Napier said of playing games on a short week. “Lot of research in the offseason and within the season when you get the opportunity. You have a limited amount of time with the staff to get the players ready.”

Louisiana has been up to the challenges. And once again, a special season could be brewing.

“This is where you can separate yourself if you get ownership from the players and they’re willing to do extra,” Napier said.

Lewis threw for three touchdowns, putting him at 65 touchdown throws in his career. He passed Jake Delhomme, who went on to an NFL career. In the most recent game, 12 different Louisiana players caught at least one pass.

The Ragin’ Cajuns have won seven games in a row since opening with a loss to then-No. 21 Texas to open the season. Along the way, Louisiana has one-, two- and three-point victories.

Most impressive was the 41-13 blowout of visiting Appalachian State on Oct. 12. The Mountaineers responded by topping previously undefeated Coastal Carolina, so that result probably gave Louisiana a boost in the polls.

The Panthers are on the move up, topping Georgia Southern 21-14 on Saturday. They own a three-game winning streak overall, putting them in a three-way tie for first place in the Sun Belt’s East Division.

Georgia State took its licks early, falling in September to Army, North Carolina and Auburn before beginning October with a 45-16 loss to Appalachian State.

One of the heroes of the Georgia Southern game was senior Jamyest Williams, who ran 23 yards for the winning points with 26 seconds left. He finished with a career-high 97 rushing yards on 12 carries. Williams has a team-leading five touchdowns.

“It brings out what your team is made of,” Georgia State coach Shawn Elliott said of putting together a winning drive after gaining possession with 1:39 remaining. “Our offense believed we were going to go down and score.”

Georgia State’s three-game win streak has featured 287 rushing yards per game. Tucker Gregg leads the team with 552 yards on the ground this season.

Quarterback Darren Grainger has been steering the offense. He has thrown for 11 touchdowns against just three interceptions.

This is the middle game in a three-week stretch of road games for the Panthers, who will face another currently ranked team, Coastal Carolina, next week.

Considering that North Carolina and Auburn were ranked when the Panthers tangled with them in road games, Georgia State can make a claim to possessing a rugged schedule.

Georgia State is 0-10 against ranked teams on the Football Bowl Subdivision level.

The Thursday matchup figures to be a taxing assignment for the Panthers. Meanwhile, Louisiana was in such a good position against Texas State that the Ragin’ Cajuns could turn for reserves down the stretch of that game.

For instance, running back Chris Smith had 238 rushing yards the week before, but he gained 70 on just nine carries last week.

It was Louisiana’s first shutout in more than nine years.

The upcoming game is a rematch of last year’s 34-31 overtime victory for Louisiana, which will be playing in its fourth midweek game of the season.