No. 23 Illinois powers past Eastern Illinois 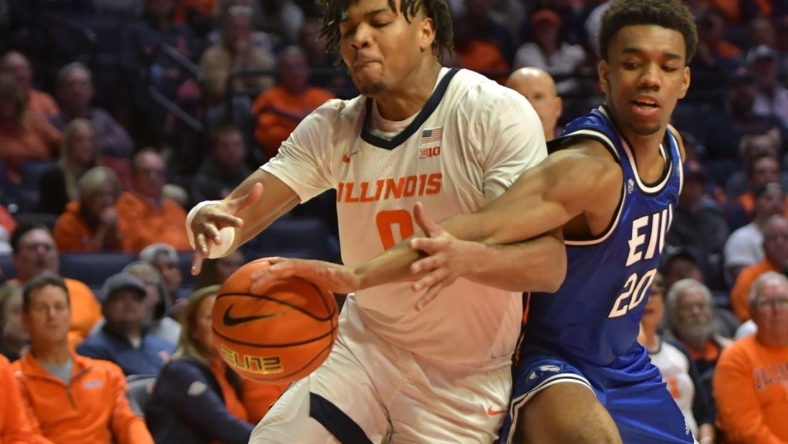 Texas Tech transfer Terrence Shannon Jr. scored 24 points, Coleman Hawkins had 23 and No. 23 Illinois clamped down on Eastern Illinois with swarming defense in an 87-57 victory Monday night in Champaign, Ill.

Shannon made 13 of 15 free throws and added eight rebounds. Hawkins scored 18 points in the first half with five 3-pointers. Dain Dainja came off the bench to post 17 points on 8-of-9 shooting and 10 rebounds.

Hawkins had a game-high 12 rebounds. The 6-foot-10 forward averaged 5.9 points per game last year but showcased his scoring potential in a lineup loaded with new blood.

Kinyon Hodges led the Panthers with 14 points and five rebounds and Yaakema Rose had 10 points and four rebounds for Eastern Illinois.

Illinois kept its pressure defense on until the final minute and forced 18 turnovers while limiting the Panthers to 35 percent shooting (21 of 60).

Shannon converted an old-fashioned three-point play as part of an 8-0 run that put the Illini ahead 63-41 with 12:40 remaining.

Illinois built a 15-point lead at halftime with six blocks — two from 6-foot-7 sophomore RJ Melendez — and a 27-14 advantage on the boards. The Illini went on to win the rebounding battle 53-30.