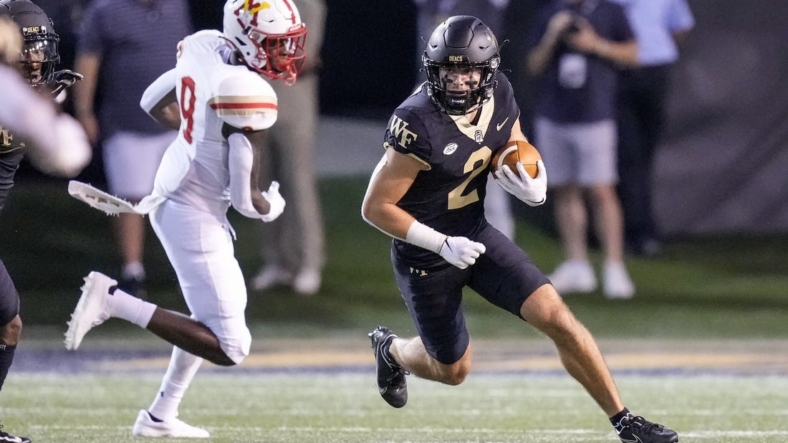 Mitch Griffis threw three touchdown passes in his first collegiate start and No. 22 Wake Forest began the season with a 44-10 romp past visiting Virginia Military Institute on Thursday night in Winston-Salem, N.C.

Christian Turner ran for two touchdowns and rushed for 100 yards on 13 carries to boost the Demon Deacons, who started the season with their highest preseason ranking in program history.

Griffis was thrust into the starting role after standout quarterback Sam Hartman was sidelined shortly after practices began last month with an undisclosed medical condition. Hartman has attended practices and the opening game, and coach Dave Clawson said that he’s expected to play this season, but no timetable has been revealed.

In the meantime, Griffis is making the most of his opportunity. He completed 21 of 29 passes for 288 yards without an interception.

The Demon Deacons were fourth nationally with 41 points per game last season and they’re above that pace after one game.

Wake Forest, which was coming off just its second 11-win season in school history, led 17-0 after less than 13 minutes. Matthew Dennis made the first of his three field goals with a 33-yarder to open the scoring.

Turner ran 35 yards for Wake Forest’s first touchdown of the season. Griffis passed to Taylor Morin for a 23-yard touchdown with 2:04 left in the first quarter.

Dennis added field goals from 31 and 33 in the second quarter before Jerry Rice’s 42-yard field on the last play of the first half put the Keydets on the board.

Griffis’ other TD passes went to Blake Whiteheart for 27 yards in the last minute of the third quarter and to Jahmal Banks for 14 yards with 11:44 left in the game.

VMI quarterback Seth Morgan was 13-for-27 for 79 yards in the air. He also gained 22 yards on three carries. The Keydets’ touchdown came in the third quarter on Collin Ironside’s 34-yard pass to Grant Swinehart.