No. 22 Villanova ready to attack beleaguered No. 15 Seton Hall 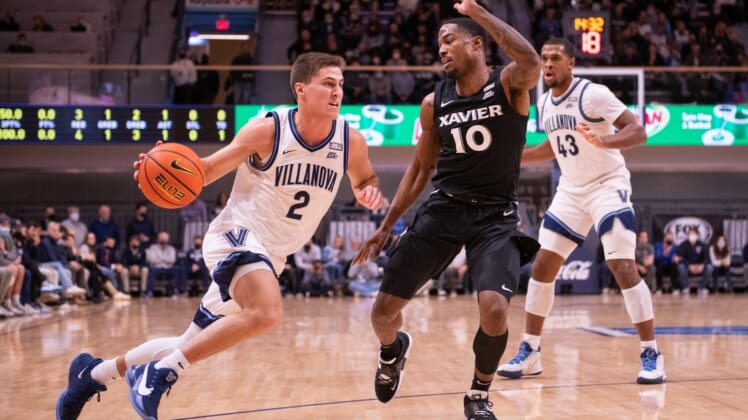 Two of the league’s four ranked teams will ring in the new year with an intriguing rivalry game Saturday in Newark, N.J., when No. 22 Villanova visits No. 15 Seton Hall.

Villanova (8-4, 1-1 Big East) snapped a concerning two-game slide Dec. 21 by beating then-No. 18 Xavier 71-58. The Wildcats haven’t played since. Their Philadelphia Big 5 game against Temple scheduled for Wednesday was postponed due to the Owls’ positive COVID tests.

Against Xavier, Villanova trailed by eight at halftime but blew past the Musketeers 41-20 in the second half while holding them to 0-for-14 from 3-point range.

“That second half was one of our best halves defensively so far this year,” Villanova coach Jay Wright said.

The Wildcats probably exhaled a bit after that result. They lost 57-36 at Baylor — the current No. 1 team in the nation — on Dec. 12. Their Big East opener didn’t assuage worried fans, as they fell 79-59 at Creighton five days later.

Wright was pleased with how the Wildcats responded after that embarrassing stretch.

“They’re young, they’re resilient, they’re confident,” he said of his players. “They actually inspire us. Coaches can get negative about every little thing, but (the players) have been great this week.”

Seton Hall (9-2, 0-1) visited No. 21 Providence on Wednesday for a belated Big East opener after spending nearly 2 1/2 weeks in a COVID-related pause. The Pirates had eight players available and lost 70-65.

“Unfortunately, I think the eight you see are going to be the eight you got until probably UConn (on Jan. 8),” coach Kevin Willard said afterward.

Willard was missing bigs Tyrese Samuel and Ike Obiagu, plus four other seldom-used players, due to COVID protocol. Also, reserve Jahari Long underwent knee surgery and is done for the season.

The Pirates gave it their best shot considering the circumstances. Alexis Yetna led them with 13 points and 11 rebounds. Bryce Aiken had 11 points off the bench, and Jared Rhoden recorded 10 points and 10 rebounds.

Providence jumped ahead with a 15-0 run in the first half, and Seton Hall slowly chipped away at the deficit throughout the second before falling short.

It was just the second loss of the season for the Pirates after a 9-1 nonconference slate that featured wins over two top-10 teams (at the time), Michigan and Texas.

Villanova has won three straight games in the long-running rivalry. The Wildcats fended off Seton Hall 76-74 and 80-72 in last season’s two meetings. They split the series in the 2019-20 season, when both sides were ranked in the Top 25 for both games.