No. 22 Tennessee looks to get back on track vs. South Carolina 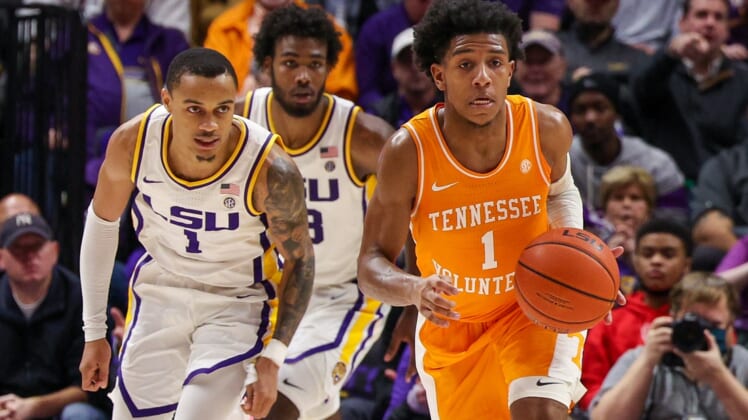 Following a mediocre week in which it split Southeastern Conference games, No. 22 Tennessee will look to get back on track when it hosts South Carolina on Tuesday in Knoxville, Tenn.

In Wednesday’s underwhelming 66-60 overtime home win over Ole Miss, the Volunteers (10-4, 1-2 SEC) missed their first 10 shots in a 19-point first half. Then, they relied on four consecutive 3-pointers to force overtime and did not take their first lead until the extra session.

Coach Rick Barnes’ group started fast Saturday in Baton Rouge against then-No. 21 LSU and held a six-point lead in the first four minutes, but it all unraveled for the visitors after that as they eventually trailed by as many as 20 points.

The Tennessee offense struggled again like it did against Ole Miss — particularly at the foul line — and 15 turnovers plagued the squad as the defensive-minded Tigers hassled their opposition in front of a manic crowd.

“I think we’ve got to get tougher,” Barnes said after the 79-67 loss. “In terms of understanding how hard it is to take care of the basketball and how hard it is to run a really good offense. How disciplined you’ve got to be mentally. I don’t think we’re there yet with the offense.”

Tennessee was 23 of 37 at the stripe, and the turnovers were daggers.

“Free throws are extremely frustrating,” said Barnes, whose Vols fell four spots in Monday’s AP rankings. “We did enough. … Just make some free throws, take away some of the really silly turnovers.

An 8 1/2 -point underdog at Vanderbilt, South Carolina finished strong in Nashville after a poor start to the week.

Following their 81-66 home loss to then-No. 9 Auburn on Tuesday, the Gamecocks (10-4, 1-1 SEC) rebounded Saturday by getting a late dunk from Devin Carter and a free throw by James Reese V to hang on for a 72-70 win over the host Commodores.

Erik Stevenson’s jumper in the first half’s final minute put them ahead of Vandy 34-32, and they led the rest of the way to even their conference record in an important road test.

One area the Gamecocks have been very good at is forcing turnovers.

In all 14 contests this season, they have forced at least 14 turnovers by the opposition, including 19 by Vanderbilt.

Coach Frank Martin said having experienced redshirt junior Jermaine Couisnard in the lineup to intensify the defensive effort in place of 6-foot-2 true freshman Jacobi Wright is a major part of the pressure.

“That’s why I left him on the court against Auburn in the second half,” Martin said. “He’s got to get up to speed — and that’s not a knock on Jacobi Wright, who’s our point guard right now.

“(Couisnard) being aggressive is something that was really good for our team. When I made the decision to go zone, he’s a bigger player. He creates more difficulty for (their) offense when we’re in a zone.”