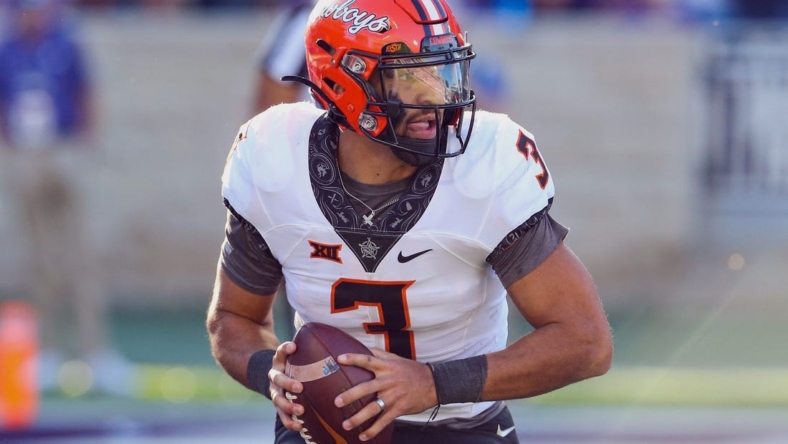 After coming on in the second half to lead Oklahoma State to a comeback win against Iowa State, quarterback Spencer Sanders was definitive about his availability for this week’s game against Oklahoma.

“Ain’t no question about it,” Sanders said.

After dropping three of their previous four games, the win over the Cyclones gave the No. 22 Cowboys (7-3, 4-3 Big 12) some much-needed momentum heading into their annual Bedlam matchup with the host Sooners (5-5, 2-5) on Saturday in Norman, Okla.

It is just the fourth time in the rivalry’s history where Oklahoma State is ranked and the Sooners are not.

Sanders is a big reason why Oklahoma State moved into the rankings. He completed 9 of 13 passes for 84 yards and one touchdown after coming off the bench in the 20-14 defeat of Iowa State.

The shoulder injury that had kept Sanders out of nearly two complete games remains a factor.

“We’re going to have to treat him the same way we’ve treated him the last five weeks,” Cowboys coach Mike Gundy said. “But that’s good news, though, if he feels like that because we need to get him ready to play.

“But he’s the one making the decisions on whether he’s playing or not.”

Sanders played a big role in the Cowboys’ 37-33 win over the Sooners last season, passing for 214 yards and a TD and rushing for 93 yards and a score.

Oklahoma State is looking for back-to-back wins over OU for the first time since 2001-02.

But Oklahoma is in a much different position than it has been for this game in quite awhile.

The Sooners are still looking to secure bowl eligibility for what would be the 24th consecutive season.

Oklahoma has dropped back-to-back games and five of its last seven.

One of the bright spots for the Sooners recently has been senior running back Eric Gray, who has averaged 148.5 rushing yards over his last four games.

“He’s been so consistent on and off the field — his daily routine, how much time he spends in the building,” Sooners offensive coordinator Jeff Lebby said. “Since we’ve been here, Eric’s been a pro.”

Both teams have struggled defensively all season, with the Cowboys last in the Big 12, allowing 452.9 yards per game. The Sooners are eighth at 432.3.

Oklahoma State has particularly struggled against the pass, allowing nearly 290 yards per game through the air.

The Sooners have struggled, though, to get their deep passing game going consistently.

Marvin Mims has hauled in long passes from Dillon Gabriel in each of the last two games, but several other deep balls weren’t completed.

Oklahoma is hoping to get help in the secondary this week. Cornerback Jaden Davis and safety Key Lawrence missed last week’s loss to West Virginia, while Justin Broiles left that game. Sooners coach Brent Venables said he expected all three to play Saturday.