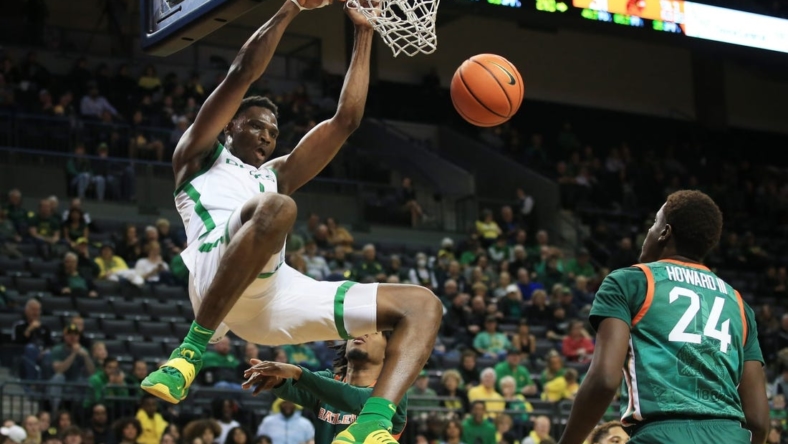 With a blowout win in Monday’s opener in the bag, the No. 21 Oregon Ducks return to the court when they host California-Irvine on Friday in Eugene, Ore.

Dante has battled injuries over his time at Oregon, but he has drawn praise for his work during the offseason.

“Since I’ve been at Oregon, I’ve never had a summer to work out with the team,” he said. “I was glad to have that, and also glad to have a team that trusts me and can pick me up.”

Oregon made just 6 of 25 3-pointers and just one in 14 attempts in the first half.

But the Ducks used a 14-0 run to take control of the game for good in the second half, after leading by 11 at halftime.

The shorthanded Ducks played without transfers Jermaine Couisnard and Brennan Rigsby due to injuries. They also won’t have returning players Lok Wur and Ethan Butler for some time due to injuries, coach Dana Altman said.

Colorado transfer Keeshawn Barthelemy added 13 points in his Oregon debut. Will Richardson, the only Duck still on the roster who faced UC-Irvine the last time the two teams met in 2019, scored 11 points.

The Ducks knocked the Anteaters out of the NCAA Tournament on March 24, 2019, with a 73-54 win in the second round. Richardson had four points and two assists in 29 minutes of action.

Oregon has defeated the Anteaters in the teams’ past six meetings and leads the all-time series 7-2, with UC-Irvine’s lone win coming in 1982.

The Ducks were picked to finish third in the Pac-12, behind UCLA and Arizona, in a poll vote among 33 members of the media who cover the conference. Richardson was named a preseason all-conference first-team selection.

The Anteaters rolled to a 96-50 win over Division III Chapman University on Monday in their season opener.

They made 54.2 percent of their shots, led by Devin Tillis and Dawson Baker with 14 points each.

Baker is a returning player who scored an average of 11.2 points per game and was an all-Big West Conference honorable mention selection last year.

UC-Irvine led by 32 points at halftime, and 13 players on the roster scored.

“I am pleased we came out and performed, pleased with the defensive effort and intensity,” he said. “We learned some lessons from the last game and we applied those lessons to this game.”

Oregon is the marquee opponent on the Anteaters’ nonconference schedule that includes West Coast Conference and Mountain West Conference opponents.

UC-Irvine was picked to finish fourth in the Big West this season by a poll of league head coaches, behind UC-Santa Barbara, Hawaii and Long Beach State.