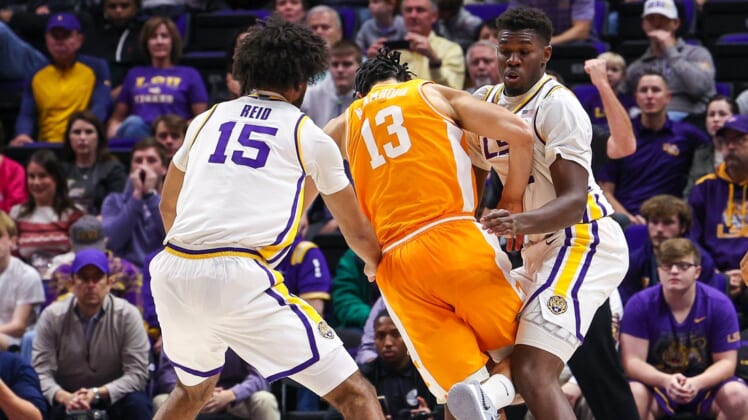 Darius Days added 15 points and Brandon Murray scored 13 as the Tigers (14-1, 2-1 SEC) beat a ranked team for the second consecutive. They defeated No. 16 Kentucky on Tuesday.

Vescovi’s 3-pointer started the second-half scoring and cut the Tigers’ lead to 42-38.

Eason scored four points as LSU expanded the lead to 49-38.

The Volunteers twice got within nine points before Eason scored five and Days scored four as the Tigers extended the lead to 62-42.

Plavsic made three free throws for Tennessee, but Days responded with a tip-in.

The Volunteers chipped away and Olivier Nkamhoua’s layup pulled them within 65-53. Tennessee got within 11 points before Eason got loose for a dunk.

Plavsic made two dunks as the Volunteers closed within nine, but Eason answered with a layup.

Chandler made 3 of 5 free throws to trim the lead to 71-63 with four minutes remaining.

Moments later Tigers starting point guard Xavier Pinson suffered a right leg injury and had to be helped to the locker room. He would return to the bench.

Vescovi made a 3-pointer to get Tennessee within five points with three minutes remaining.

Eric Gaines made a steal and fed Murray for a layup, and Murray fed Eason for a dunk to put LSU in control with a 75-66 with 1:13 left.

Josiah-Jordan James and Vescovi each made a 3-pointer as the Volunteers took an early 9-3 lead.

The Volunteers twice pulled within four points before the Tigers rebuilt the lead to nine.

Chandler made a layup to pull Tennessee within 42-35 at halftime.