No. 20 UConn shuts down Seton Hall in Big East quarters 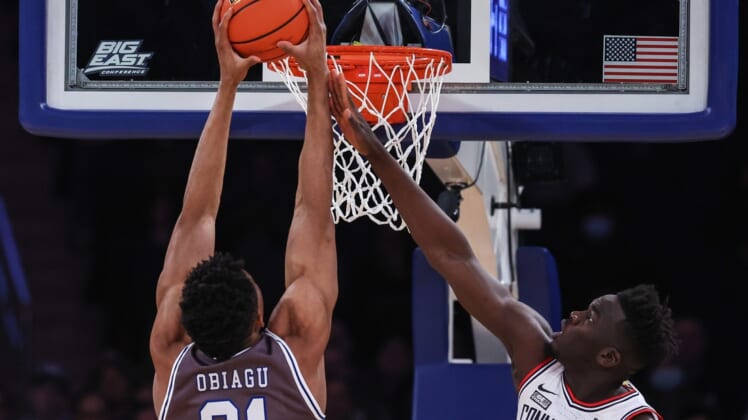 The third-seeded Huskies (23-8) took the lead for good at 6-4 and cruised. They advanced to take on No. 8 Villanova, the second seed, in Friday’s semifinal round.

Isaiah Whaley put up 10 points, seven rebounds — including six on the offensive glass — and four blocked shots. UConn’s defense clamped down on the Pirates, who posted a season low in points for the second straight night.

UConn led 29-18 at halftime, holding Seton Hall to its lowest-scoring half of the season.

The Huskies hit a flurry of 3-pointers to open their first double-digit lead at 17-7. Tyler Polley, Cole and Martin knocked down shots from behind the arc in a span of 2:03.

They went up 20-9 before Seton Hall fought back with six straight points, capped by Cale’s triple off a UConn turnover. Cale was the Pirate offense’s lone bright spot in the half, scoring eight points and going 2-for-2 from deep.

But the Huskies went on a 9-0 run, anchored by Andre Jackson’s 3, while holding the Pirates scoreless for more than five minutes. Seton Hall shot just 7 of 28 for the half.

UConn managed just three points in the first five minutes after intermission, leaving the door cracked open for Seton Hall. The Pirates cut their deficit to seven points three times during the half, with Cale again doing the brunt of the work on offense.

But with the Pirates down 38-31, UConn rang up the next nine points, starting with Polley’s bucket and foul shot. The Huskies led 47-31 with 10:14 to play after Martin’s free throws, and Seton Hall did not draw within a single-digit margin again.

UConn did not shoot the ball efficiently, but it capitalized on 17 Seton Hall fouls to go 12 of 14 at the free-throw line. It also controlled the boards, 46-33. Adama Sanogo had a game-high 11 rebounds to help the Huskies.