No. 20 Notre Dame out to justify return to rankings vs. Navy 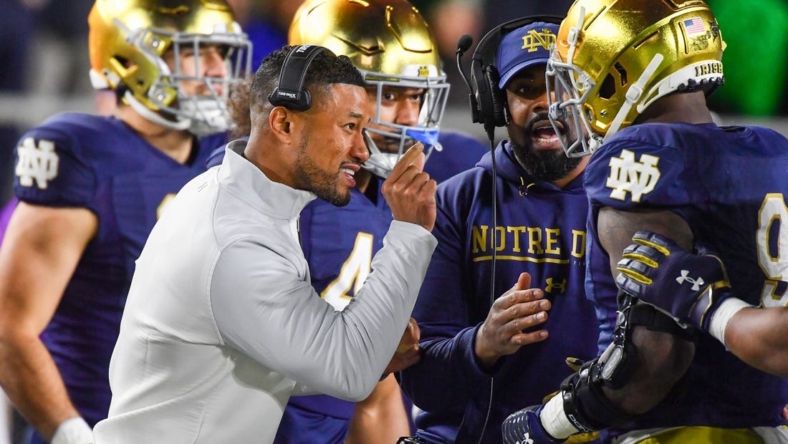 There were a few bumps in the road, but now first-year coach Marcus Freeman has Notre Dame rolling.

The Fighting Irish thoroughly dominated then-No. 4 Clemson last week in a 35-14 home victory. That was enough for them to appear at No. 20 in the College Football Playoff rankings this week after being absent from last week’s debut.

Notre Dame will begin the home stretch of its schedule against Navy on Saturday in Baltimore.

Notre Dame (6-3) took ugly losses to Marshall and Stanford earlier in the season, but it was more impressive and well-rounded in wins over North Carolina, BYU, Syracuse and now Clemson, each of whom has spent some time in the AP or CFP rankings this year.

Notre Dame ran down Clemson’s throats, gaining 263 yards on the ground. Logan Diggs had 114 yards on 17 carries and Audric Estime added 104 yards plus a touchdown on 18 carries. Estime leads the team with 662 rushing yards (5.7 per carry) and nine scores.

Estime and the Irish are preaching focus to avoid a letdown against a lower-caliber opponent.

“We don’t really try to look at an opponent, we just try to focus on our job and doing what we do,” Estime said. “We can’t just play down to a team, we’ve got to play to our standard. And if we play to our standard every week, I feel like we should handle business no matter who the opponent is.”

The Baltimore Ravens’ M&T Bank Stadium is the site of this season’s rivalry game with Navy (3-6), which alternates between Notre Dame’s campus in South Bend, Ind., and a variety of mostly neutral sites. The game was set to be played in Dublin, Ireland, for the third time in 2020 before the COVID-19 pandemic nixed those plans.

But Baltimore is close to the Naval Academy’s base in Annapolis, Md., and the game represents an important tradition for Navy football and one of a number of recruiting-pitch bullet points for coach Ken Niumatalolo.

“Obviously there are a lot of people that want to play Notre Dame,” Niumatalolo said. “We’re grateful for a chance to play such a historic program. We wish we would have a couple more W’s on our side of the ledger. Considering the history, it’s a really special game.”

The Midshipmen are coming off a 20-10 road loss to Cincinnati, the two-time defending champions of the American Athletic Conference. Navy racked up 176 yards on the ground but allowed two big touchdown passes from Ben Bryant to Tyler Scott.

“I thought Xavier played a really good game. I’m proud of him,” Niumatalolo said. “Thought he performed well in a hostile environment, did a lot of good things and super encouraged with his play as we make this stretch run.”