No. 20 Kentucky slams Miami of Ohio in season opener 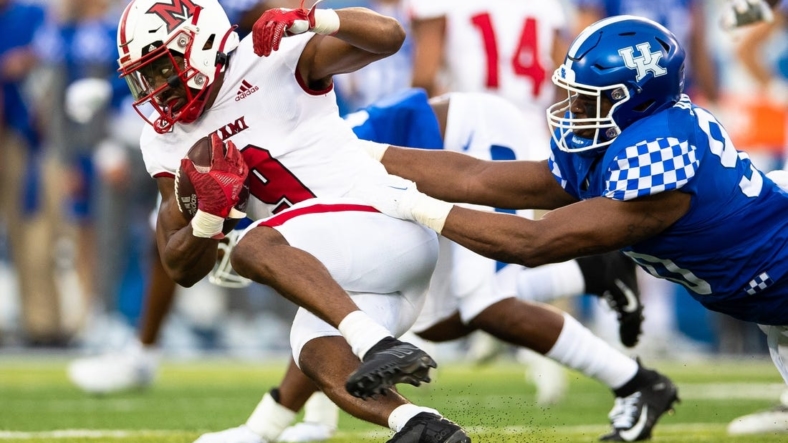 Will Levis threw for 303 yards and three touchdowns and Barion Brown added a 100-yard kickoff return for a score to lift Kentucky to a 37-13 victory over visiting Miami of Ohio on Saturday in Lexington, Ky.

Levis, who was 21-for-32 passing, found Tayvion Robinson six times for 136 yards, while Dane Key added four receptions for 53 yards and a touchdown and Brown contributed three catches for 45 yards to complement his highlight on special teams.

After his team led 13-10 at the half, Brown caught the second-half kickoff on the goal line and ran upfield before cutting to his left. He raced down the sideline untouched for a 20-10 lead just 13 seconds into the third quarter.

Matt Ruffolo got the three points back for the Wildcats when he connected on a 50-yard field goal with 1:09 left in the third quarter.

Levis threw his third touchdown of the game when he hit Key over the middle from a yard away for a 37-13 lead with 7:46 left.

The Wildcats were without All-SEC running back Chris Rodriguez Jr. and senior outside linebacker Jordan Wright, who were suspended for at least the season opener by coach Mark Stoops for off-the-field violations committed during the offseason.

Kavosiey Smoke tried to fill the void left by Rodriguez, but he was held to 32 yards on seven carries. The Wildcats struggled running the ball, mustering just 50 yards on 26 carries.

After Tyre Shelton gave the RedHawks a 7-0 lead on a 22-yard run with 9:39 left in the first quarter, Kentucky needed just a little more than two minutes to pull even. Levis’ 6-yard touchdown pass to Brenden Bates capped a five-play, 79-yard drive.

Brett Gabbert went 20 for 28 for 166 yards for Miami, while Shelton finished with 50 yards and a score on seven carries.