No. 20 Houston rallies to edge Auburn in Birmingham Bowl 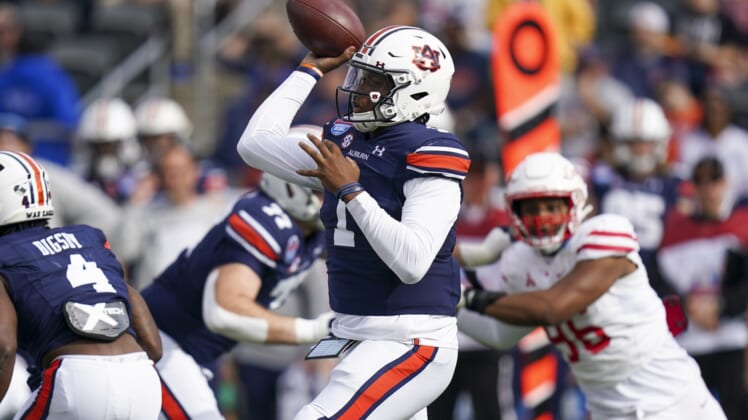 Clayton Tune completed 26 of 40 passes for 283 yards and two touchdowns, including the go-ahead score late in the fourth quarter, as No. 20 Houston rallied for a 17-13 win over Auburn on Tuesday in the Birmingham Bowl in Birmingham, Ala.

Alton McCaskill and Jake Herslow each had a touchdown reception for Houston (12-2). Nathaniel Dell had 10 catches for 150 yards to lead the Cougars.

Herslow hauled in the decisive touchdown catch with 3:27 to go. Tune hit him for a 26-yard touchdown that capped a dramatic eight-play, 80-yard drive to knock off Auburn in its home state.

Auburn carried a 13-10 lead into the fourth quarter. The Tigers scored 10 unanswered points in the third.

Ben Patton made a 35-yard field goal early in the third quarter to draw the Tigers within 10-6.

Then, with 3:52 left in the third quarter, Finley found Kobe Hudson for a 12-yard touchdown to put Auburn on top. It was the fourth receiving touchdown of the season for Hudson.

Auburn opened the scoring in the first quarter on a 5-yard touchdown pass from Tune to McCaskill. It was the second touchdown catch of the season for McCaskill, who also had 16 scores on the ground.

A 52-yard field goal by Dalton Witherspoon made it 10-0 Houston midway through the second quarter. It was Witherspoon’s longest kick of the season.

Auburn got on the scoreboard with 3:10 to go in the first half when Patton made a 27-yard field goal.

McCaskill finished with 14 carries for 78 yards to go along with four catches for 15 yards and a touchdown.