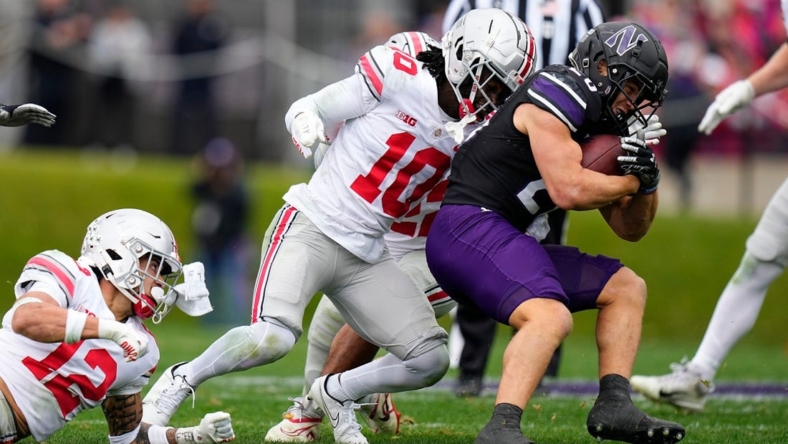 Ohio State overcame the elements and upset-minded Northwestern when Miyan Williams scored two second-half touchdown for the No. 2 Buckeyes in a 21-7 win against the Wildcats in Big Ten play at Evanston, Ill., on Saturday.

Heisman Trophy candidate C.J. Stroud of Ohio State (9-0, 6-0 Big Ten) passed for a career-low 76 yards on 10-of-26 passing while being hampered by the adverse conditions. He ran for a carry-high 79 yards on six carries, including a 44-yarder late in the fourth quarter to set-up a 2-yard run by Williams to make it 21-7.

While Ohio State set an FBS record by scoring 20-plus-points in 70 straight games, breaking a tie with Oklahoma (2016-21), it wasn’t easy.

Northwestern quarterback Brendan Sullivan was 10 of 14 for 79 yards. Evan Hull rushed for 122 yards on 30 carries.

The halftime score was as stunning as the way it came about in a game played in heavy rain at times and sustained winds between 20 and 30 miles per hour with gusts to 50.

Ohio State was held scoreless in the first quarter, against the wind, for the first time this season and did not tie the score until 2:26 remained in the half on a 15-yard run by Emeka Egbuka.

Stroud, who was 6 for 16 for 46 yards through two quarters, had a critical 16-yard keeper on a fourth-and-1 from the Northwestern 37 to keep the drive alive. He then ran for 6 yards on the next play before Egbuka’s score.

The Wildcats outgained the Buckeyes 140-118 by halftime, including 109 of that on the ground. Hull rushed for 16 of his 75 first-half yards for a TD in the first quarter and the 7-0 lead.
Ohio State has won 10 in a row against the Wildcats.