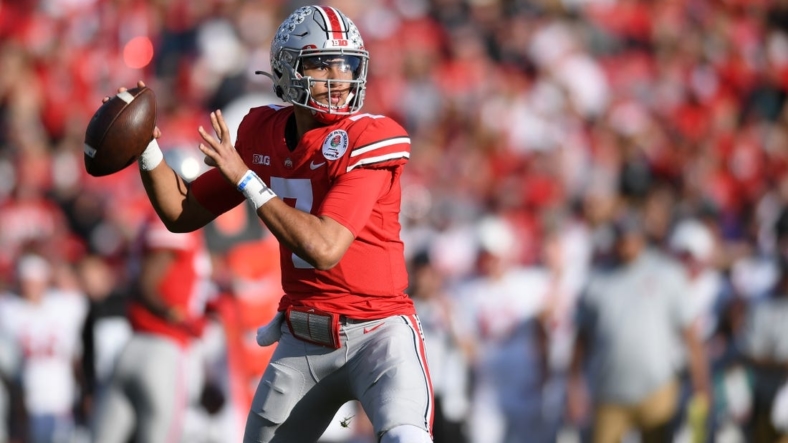 The first game of the season for two storied programs could have implications for January when No. 5 Notre Dame plays on the road against No. 2 Ohio State on Saturday night at Columbus, Ohio.

While the loser will not automatically be eliminated for one of the four spots in the College Football Playoff, no two-loss team has ever been selected for the playoff, which began in the 2014 season.

That is a lot of pressure for both schools, but maybe more so for Ohio State (11-2 last season). Despite a 48-45 win over Utah in the Rose Bowl on Jan. 1, the Buckeyes had a subpar season by their lofty standards.

Ohio State lost 35-28 at home to Oregon in the second game of last season and were manhandled by Michigan 42-27 in the regular-season finale. It was the Buckeyes’ first loss in the heated rivalry since 2011.

“Maybe at some places, 11-2 with a Rose Bowl victory is a good year. It isn’t at Ohio State,” Buckeyes coach Ryan Day said. “Our three goals are to beat that team up north (Michigan), win the Big Ten championship and the national championship. Those are our goals. Those things didn’t happen last year.

“Coming off of last year, there’s no big heads. This team is hungry. … We’ve got a lot to prove.”

The Fighting Irish (11-2 last year) are well regarded even with a novice in charge. Defensive coordinator and linebackers coach Marcus Freeman was promoted to head coach on Dec. 3 to replace Brian Kelly, who left for LSU.

Freeman, an Ohio State linebacker from 2004-08, said Monday that sentimentality will take a backseat during his team’s visit to Columbus. The priority is to have his team prepared to face Heisman Trophy candidate C.J. Stroud, Ohio State’s quarterback.

“Right now, I’m pretty emotionless about going back to Ohio State, but more it’s about the emotions you have (that) we get to go play a great team,” Freeman said. “You get to go play in a great, hostile environment, and that’s, to me, where the emotion is.”

Stroud, entering his third season at Ohio State but his second as a starter, threw for 4,435 yards with 44 touchdowns against six interceptions last season when he was a Heisman Trophy finalist.

Freeman’s key to a Notre Dame victory is a determined rush defense.

“If you don’t stop the run, they’ll run it all day long, so the ability to stop the run is most important,” he said.

Day agrees that dominating the line of scrimmage is crucial.

“It’s a point of emphasis for every game we play,” he said. “That’s where the games are won and lost.”

For Notre Dame, Tyler Buchner will make his first start at quarterback, although he played in 10 games as a freshman last season.

The Fighting Irish could be without All-America candidate Jarrett Patterson, a left guard, because of a foot sprain. That could be a problem against the new-look Ohio State defense under coordinator Jim Knowles, who was lured from Oklahoma State, where he produced one of the top defenses in the nation.

However, Notre Dame had some success against him in a 37-35 loss to the Cowboys in the Fiesta Bowl last season.