No. 19 Villanova rolls over Creighton for third straight win 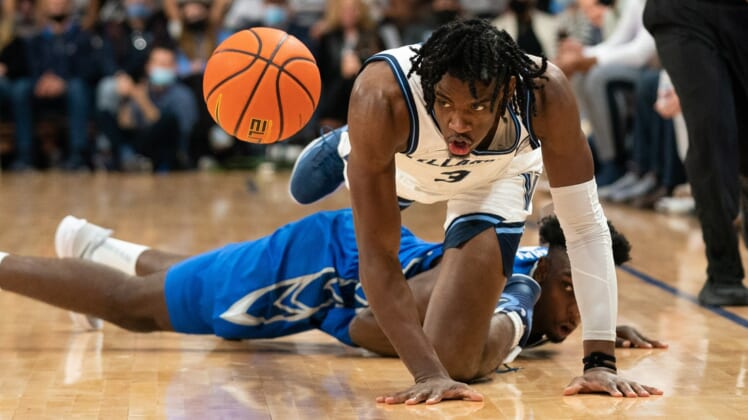 Justin Moore scored 22 points to lift No. 19 Villanova past visiting Creighton 75-41 on Wednesday.

Jermaine Samuels added 18, Collin Gillespie contributed 11 and Brandon Slater had 10 for the Wildcats (10-4, 3-1 Big East), who won their third in a row.

The win was the 500th for head coach Jay Wright, who is in his 21st season at Villanova.

The Bluejays, who defeated Villanova 79-59 on Dec. 17, had their two-game winning streak snapped.

The game was tight midway through the first half until Villanova began to slowly build a slight lead. Samuels dropped in one of two free throws for a 21-17 advantage with 9:07 left.

After a pair of empty possessions by Creighton, Moore hit two free throws for a six-point lead.

O’Connell then responded with a 3-pointer from the wing to slice the deficit in half.

The Wildcats soon regained a 30-20 lead with 3:15 to go after a three-point play by Slater.

Two more baskets by Villanova capped an 11-0 run and a 14-point lead.

Ryan Kalkbrenner came back with a dunk for the Bluejays.

Villanova led 36-22 at halftime thanks in large part to Moore’s 13 points.

O’Connell paced Creighton with nine, but it trailed partly because of 10 turnovers.

The Wildcats ripped off 10 straight points to open the second half for a commanding 24-point advantage.

Gillespie hit a deep 3-pointer, his first basket of the game, and the Wildcats moved out to a 60-34 lead with 9:08 remaining.

Samuels then began to take over on the offensive end. Following a three-point play by Samuels with 6:47 left, Villanova led 65-36.

The Wildcats cruised to the win from there.