No. 19 SDSU comes from behind to top BYU 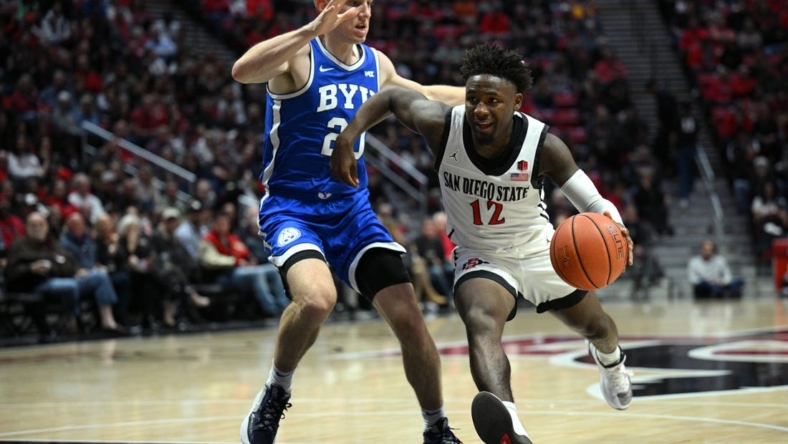 BYU (1-1) led most of the way and had a chance to pull within one point with 1:23 remaining, but Rudi Williams missed two free throws. The Aztecs (2-0) then scored six straight in the final minute to seal the win.

Nathan Mensah contributed 14 points with 10 rebounds and made a huge defensive play as San Diego State surged past BYU in the latter portion of the second half.

Johnson, who hit a key trey late in BYU’s season-opening win over Idaho State, drained a 3-pointer for a 63-61 lead on Friday. He then hit back-to-back jumpers as the Cougars increased their edge to 67-61 with 6:50 left.

Trammell hit a 3-pointer and added a free throw after a steal. BYU’s Noah Waterman made a free throw, but Mensah, LeDee and Lamont Butler each converted layups as the Aztecs took their biggest lead to that point, 71-68.

Williams gave BYU some hope with a layup, but Mensah responded with his own layup and then a defensive gem, blocking a Traore dunk attempt from behind.

Trammell stretched the Aztecs’ edge to 76-70 with another trey with 2:03 to play.

BYU outshot San Diego State from the field, 45.9 percent to 40 percent. However, the Aztecs held a huge advantage at the charity stripe, converting 26 of 37 free throws compared to BYU’s 10-for-16 outing.

The Cougars went ahead 52-42 early in the second half after George hit a couple of 3-pointers and Traore compiled a layup and a jumper.

Mensah snapped the Aztecs’ cold spell with a three-point play, and San Diego State scored eight consecutive to pull within 52-50.