No. 19 Kansas State improves Big 12 stock with blowout of Baylor 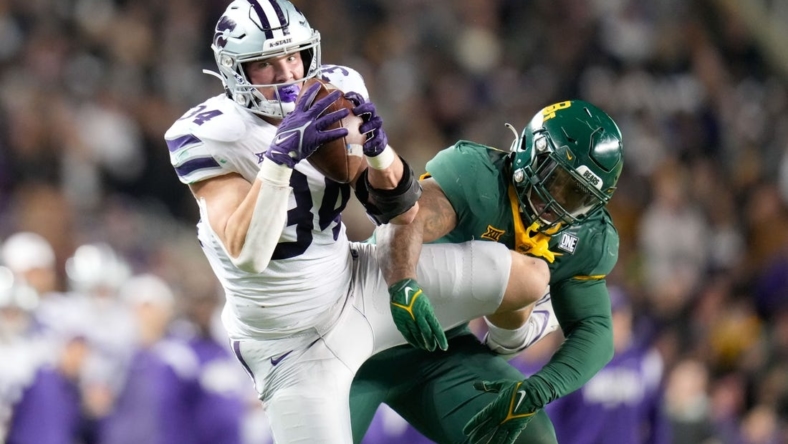 K-State kept hope alive for a berth in the Big 12 Championship Game Dec. 3 in Arlington, Texas. If the Wildcats win their last two games, they only need one loss by Texas to claim a spot.

Howard finished 19 of 27 for 196 yards. Deuce Vaughn had 106 yards rushing and 50 yards and a touchdown receiving.

Baylor (6-4, 4-3) had won three straight games entering Saturday to move into a tie for second place in the conference with K-State and Texas. Baylor quarterback Blake Shapen was 22-for-38 for 203 yards with two interceptions.

After Baylor failed to convert a fourth-and-10 and punted on back-to-back drives to open the second half, Howard hit Ben Sinnott for a 19-yard touchdown to put the Wildcats ahead 24-3 with 1:53 left in the third quarter. K-State stopped Baylor on fourth-and-3 on the Baylor 19, and DJ Giddens punched it in from the 1-yard line to give the Cats a four-touchdown lead.

For the second time this season, K-State’s starting quarterback, Adrian Martinez, was hurt in the first quarter and was replaced by Howard. Martinez converted a third-and-short on K-State’s second drive, but he was injured on the play. Howard came in and completed a 97-yard drive in 12 plays. He hit Sinnott on a 15-yard touchdown pass for the score.

Howard then led another 12-play drive that put the Wildcats up 10-0 with 5:57 left in the first half. Ty Zentner hit a 31-yard field goal.

Howard hit Deuce Vaughn on a 20-yard catch-and-run to put the Wildcats up 17-0 late in the first half. Baylor got a 37-yard field goal by John Mayers with 16 seconds left before the break.

K-State dominated the stat sheet in the first half, outgaining the Bears 256-123 in total yards.