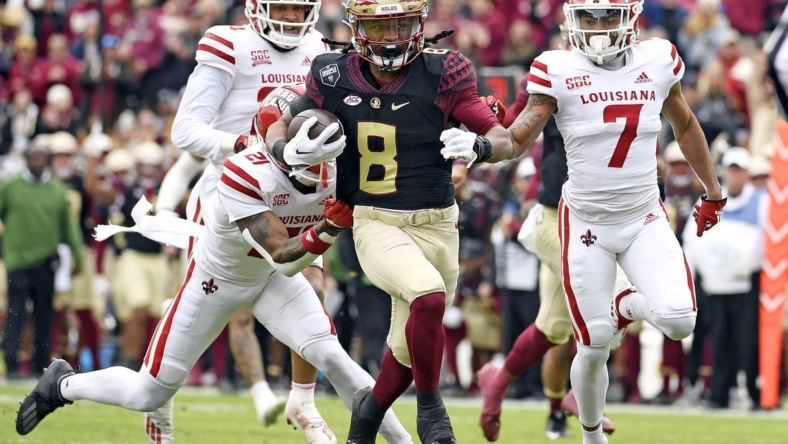 Jordan Travis and Treshaun Ward each rushed for two touchdowns as No. 19 Florida State routed Louisiana 49-17 in a nonconference game Saturday afternoon in Tallahassee, Fla.

The Seminoles (8-3, 5-3 ACC) took a 21-0 first-quarter lead and rolled to their fourth consecutive victory. They have outscored their last four opponents 173-39.

Chandler Fields threw a touchdown pass and ran for a touchdown for the Ragin’ Cajuns (5-6, 3-4 Sun Belt), who need to win at Texas State in their regular-season finale next Saturday to become bowl eligible.

Trey Benson’s 2-yard touchdown run on FSU’s first possession of the third quarter increased the lead to 42-3. Benson finished with 80 rushing yards, snapping his three-game stretch of reaching 100 yards on the ground.

On the first play of the ensuing possession, the Seminoles recovered a fumble at the Louisiana 18. Three plays later, A.J. Duffy threw a 16-yard touchdown pass to Markeston Douglas for a 49-3 lead that remained at the end of the third.

On fourth and goal from the 5, Fields connected with Michael Jefferson for the first touchdown against FSU in three games. Fields added a 5-yard scoring run.

On the first possession of the game, the Seminoles drove 75 yards, the last 36 of which came on Ward’s touchdown run.

After the Cajuns went three and out, FSU drove 65 yards and Travis ran 3 yards for a touchdown and a 14-0 lead.

Travis’ 13-yard touchdown run pushed the lead to 21-0 near the end of the first quarter.

Ward added a 1-yard run to extend the lead to 28-0 midway through the second quarter.

The Seminoles scored their first touchdown through the air when Travis connected with Malik McClain on a 9-yard scoring pass for a 35-0 lead.

Louisiana drove to a first-and-goal at the FSU 2 but settled for Kenneth Almendares’ 24-yard field goal as time expired, reducing the lead to 35-3 at halftime.