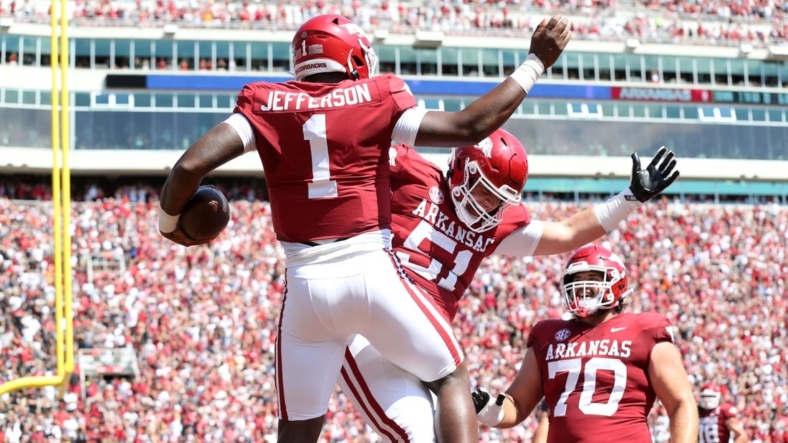 KJ Jefferson threw for 223 yards and was responsible for four total touchdowns as No. 19 Arkansas outlasted visiting No. 23 Cincinnati 31-24 in both teams’ season opener in Fayetteville, Ark.

Raheim Sanders racked up 117 rushing yards and tight end Trey Knox caught two touchdowns for the Razorbacks. Jefferson completed 18 of 26 passes and added 62 rushing yards on 18 carries, as Arkansas finished with 224 yards on the ground as a team.

Cincinnati quarterback Ben Bryant went 26-for-43 for 325 yards, two touchdowns and one pick. Corey Kiner ran for 59 yards and a touchdown for the Bearcats, who lost in the regular season for the first time since 2019.

Bryant started the game 5-for-5 before being intercepted by Dwight McGlothern, who managed to return it 51 yards into Cincinnati territory. That set up Jefferson’s 15-yard touchdown run to open the scoring.

Cincinnati’s Ryan Coe missed a 25-yard field goal at the end of the first quarter, and on his second attempt, from 48 yards, he hit the top of the right upright with 1:14 left in the half.

The Razorbacks worked down the field, and Sanders’ 37-yard sweep run to the right brought them to the 5-yard line. Jefferson faked a run up the middle and completed a jump pass over the line to Knox, making it 14-0 at halftime.

Cincinnati opened the second half with a 12-play, 75-yard drive concluding with Kiner’s 5-yard touchdown run. The Cincinnati native transferred this offseason from LSU.

Arkansas responded when Jefferson hooked up with a leaping Jadon Haselwood at the goal line for a 19-yard touchdown. But Bryant floated a 35-yard touchdown pass to a wide-open Nick Mardner to cut the Bearcats’ deficit to 21-14.

On Arkansas’ next drive, Jefferson fumbled the snap on first down and Cincinnati recovered at the Razorbacks’ 3. But the Bearcats proceeded to commit four penalties for 20 yards and had to settle for a field goal on a long fourth-and-goal.

The Razorbacks added a field goal for a 24-17 advantage, and their momentum grew when Jordan Domineck strip-sacked Bryant and recovered the fumble. On the very next play, Jefferson hit Knox on the right sideline and after a great block, he sprinted for a 32-yard touchdown.

Bryant hit Leonard Taylor for a 15-yard score with 5:49 left to play, but Arkansas chewed up the remaining clock, with Jefferson converting two third downs with his legs.