After a home loss in its opening game, No. 18 Wisconsin will look for redemption when it welcomes Eastern Michigan into Madison on Saturday.

Wisconsin (0-1, 0-1 Big Ten) is coming off a 16-10 loss against then-No. 19 Penn State last weekend. The game was scoreless at halftime and 7-7 after three quarters, but the Nittany Lions gained the upper hand in the fourth quarter.

Badgers left tackle Tyler Beach said he and his fellow linemen needed to do more to help the team.

“We’re better than that,” Beach said. “The good thing is that we can see where we messed up. And it’s good that this happens now rather than later. Gets us ready for the rest of the season.”

For many years, Wisconsin has prided itself on a run-heavy offense, and this season is no different. Badgers running back Chez Mellusi led the team with 31 carries for 121 yards and a touchdown in the opening game, while Isaac Guerendo contributed 56 yards on 13 carries. 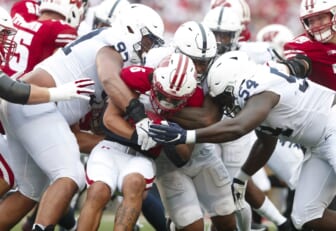 The passing game was a different story, however. Quarterback Graham Mertz completed 22 of 37 passes for 185 yards and two interceptions.

Wisconsin coach Paul Chryst stood up for his quarterback heading into this week’s game.

“I’ve liked the way that he’s handled it and approached it from personal interactions with him,” Chryst said. “I think that he’s trying to do the right thing and owning the things where he can be better. I think he’s got good energy and understands his role in this whole big picture.

“I’ve spent time with him. It’s hard for everyone, right? But it’s an opportunity, an opportunity to get better, and I am confident he’ll do that.”

Mertz said the game offered a new opportunity to put last week’s disappointment behind him.

“I’m obviously not proud of how it ended,” Mertz said. “There are definitely a lot of things that fell on my plate that I need to clean up. I will.”

Meanwhile, Eastern Michigan (1-0) is looking to beat a Top 25 team for the first time in school history. The Eagles are coming off a 35-15 win over FCS opponent St. Francis (Pa.) on Friday.

Samson Evans finished with three rushing touchdowns for the Eagles. As a team, Eastern Michigan rushed for 221 yards and five touchdowns.

The successful start came after Eastern Michigan signed coach Chris Creighton to a contract extension through the 2025 season.

Creighton has won each of his past three meetings with Big Ten opponents.

“I can’t compare Wisconsin to playing Rutgers in 2017 or Purdue in 2018 or Illinois in 2019,” all Eastern Michigan wins, Creighton said, according to the Detroit News. “All of the scenarios, situations and programs, all of those things are different. This is the best football team that I’ll ever coach against in my entire life, and certainly in these last eight years at Eastern Michigan, these guys are phenomenal.

“(The Badgers have) been great for over a decade. I thought they outplayed Penn State, didn’t win the game and had some situations that they wished they could have back I’m sure, but when you look at the totality of the game, I thought that they were the better team.”