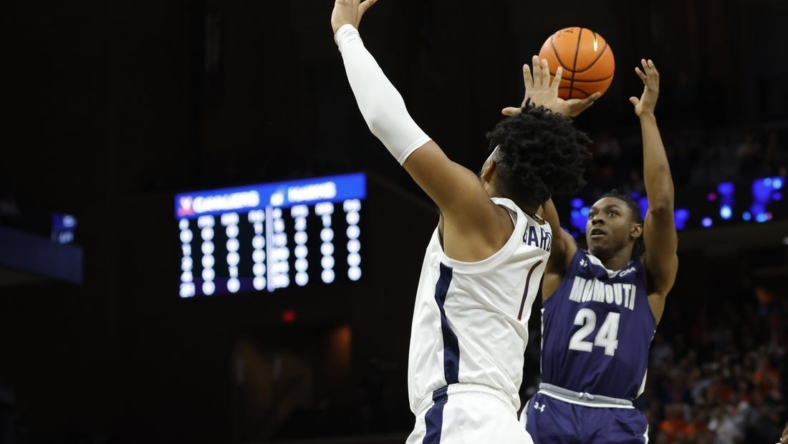 No. 18 Virginia overwhelmed visiting Monmouth with depth, defense and long-distance shooting in an 89-42 victory Friday night in Charlottesville, Va.

Ryan Dunn added 13 points and Ben Vander Plas had 10 for Virginia, whose reserves outscored the Monmouth bench 48-12. The Cavaliers had 23 assists and only committed six turnovers.

The Cavaliers knocked down 11 3-pointers in their season-opening win Monday against North Carolina Central. Their season high last season was 10 treys.

Myles Foster led Monmouth with 10 points, all in the first half. The Hawks were outrebounded 35-21 and just had too many long scoring droughts.

Virginia’s largest lead was the final score, on Dunn’s dunk with 1:02 left.

The Cavaliers improved to 41-1 under head coach Tony Bennett when scoring 80 or more points, and to 107-2 when holding opponents under 50 points.

Monmouth hung around early, as Virginia did not take its first lead until McKneely’s free throw made it 14-13 with 12:33 left in the half.

The Cavaliers never trailed again. A 12-0 run put Virginia on top 31-17, capped by Kadin Shedrick’s dunk on an alley-oop pass from Kihei Clark with 7:07 remaining.

Virginia scored the last nine points of the half, doubling up Monmouth with a 42-21 lead at intermission. Vander Plas scored five of those points, including a 3-pointer with 1:10 left.

Foster led all players with 10 points in the first half on perfect 5-of-5 shooting. Virginia’s bench outscored the Hawks’ reserves 19-0 in the half.