No. 18 Tennessee rallies vs. Ole Miss, wins in OT 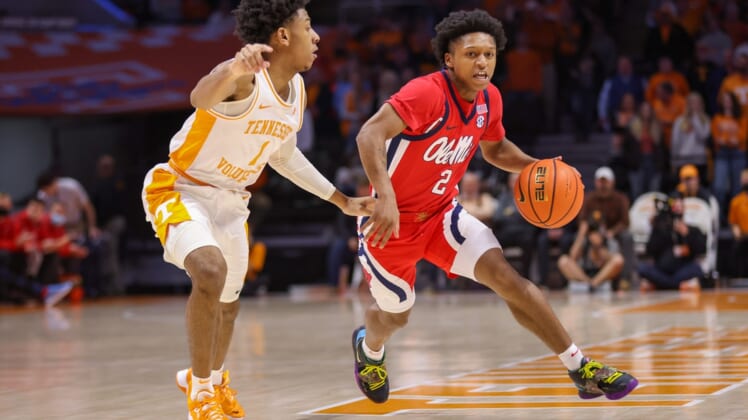 Santiago Vescovi scored 15 of his 17 points in the second half and overtime as No. 18 Tennessee rallied Wednesday night to beat Ole Miss 66-60 in Knoxville, Tenn.

Down 48-41 with 3:54 remaining in regulation, Tennessee saw Vescovi gain a 4-point play and a 3-pointer to help force overtime.

In the extra session, he made another 3-pointer and two free throws, and Olivier Nkamhoua scored five as the Volunteers (10-3, 1-1 SEC) notched their first conference win and improved to 8-0 at home despite leading just 3:16 of the contest.

After having their SEC opener against Florida postponed a week ago, the Rebels (8-5, 0-1) — a 17-point underdog — got a career-high 23 points from Tye Fagan on 8-of-11 shooting from the field, including 5-of-6 from long distance.

Both teams came out as cold as the wintry spell that consumed the region earlier in the week. They combined to miss all seven of their shots from the field and go scoreless before the first TV timeout at 15:57.

Ole Miss built an 8-0 lead before the Vols connected on their 11th attempt from the field — an uncontested bank shot by Fulkerson at 12:24.

Despite starting 1-for-15 and struggling against the Rebels’ 2-3 matchup zone, the home side inched back into the game with its own strong defensive effort and trailed just 21-19 at halftime.

Tennessee tied it at 31 on a dunk by James off Chandler’s pass at 13:29 left, but Fagan and Murrell made consecutive threes to push the lead to six.

Chandler’s layup knotted it at 38 with 9:53 left, but Fagan drained two triples as the lead grew to eight.