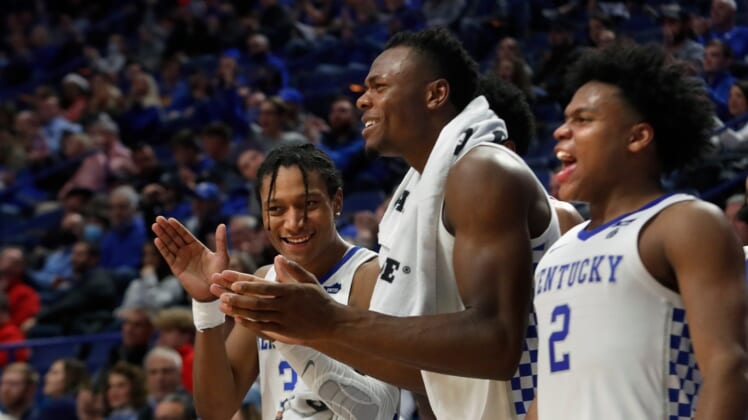 After building momentum in nonleague action, the No. 18 Kentucky Wildcats will open Southeastern Conference play by hosting the struggling Missouri Tigers Wednesday.

The Wildcats (9-2) rolled into the Christmas break with resounding victories over North Carolina (98-69) and Western Kentucky (95-60).

The Wildcats will have a massive advantage inside with center Oscar Tshiebwe, who is averaging 16.1 points and 15.5 rebounds per game. He scored 14 points and grabbed 28 rebounds against Western Kentucky.

“I’m not the tallest guy — but I think I have a big heart,” Tshiebwe said. “When you need something, it does not matter how big you are. When you go for it, you’re gonna get it.”

Missouri coach Cuonzo Martin has been playing a smaller lineup in recent games, which has forced forward Kobe Brown to defend the low post much of the time.

Brown leads the Tigers in scoring (14.8 per game) and rebounding (8.9 per game), but Illinois center Kofi Cockburn overwhelmed him with a 25-point, 14-rebound performance.

Freshman forward Trevon Brazile has added some inside presence after missing the first eight games with a medical issue. He scored 11 points and blocked six shots against Illinois.

Kentucky has become more efficient offensively while still playing at a fast pace. The Wildcats have five players scoring in double figures — including TyTy Washington Jr. at 13.9 — and they have scored 85 or more points in five of their last seven games.

The Tigers will have their hands full trying to slow them down.

“We are pressing, we’re running, it doesn’t stop, and that’s the way we want the game,” Calipari said. “Now, we’re going to be playing teams that are going to try to shorten the game, so I got to figure out ways when they’re trying to throw 15, 20 passes before they play, what are we going to do? How do we say, ‘You’re not playing that way.'”

Missouri is one of the nation’s worst perimeter shooting teams with a 24.7 percent success rate from three-point range.

“It’s a struggle just because you want to see your team make shots,” Martin said. “The thing I always go back to, continue to work on it, and if you’re getting your open looks, they’ll fall. If you’re a three-point shooter and you’re working on it in practice, eventually they’ll fall.”

The Tigers have also done a poor job of defending three-point shooting. Of Missouri’s 12 opponents, eight have shot 40 percent of better from beyond the arc.

The solution, Martin said, is “just pride on defense, guarding your man, guarding, getting up on the ball, force guys to make plays off the dribble. That means really being aggressive defensively.”