No. 18 Alabama, No. 20 UConn duel in Knight Invitational semis 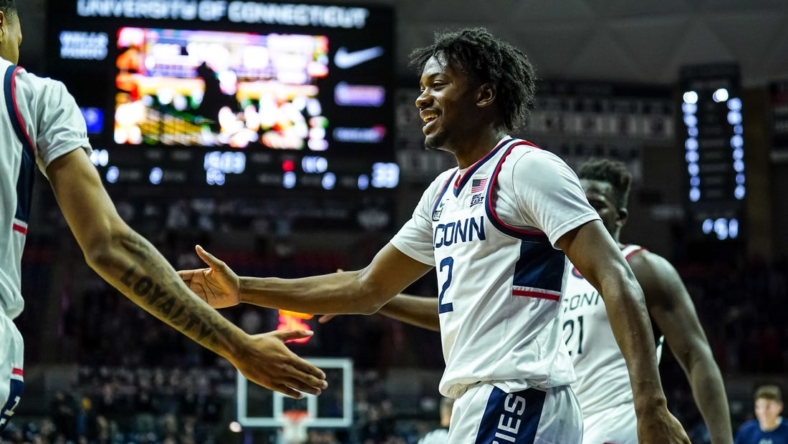 No. 20 Connecticut set a school record by making 17 3-pointers Thursday night in an 83-59 rout of Oregon at the Phil Knight Invitational in Portland, Ore.

No. 18 Alabama also used the 3-point arc to its advantage when it toppled No. 12 Michigan State 81-70 in the final first-round matchup.

The Huskies and Crimson Tide will collide in a semifinal game Friday night that could see the arc again play a major role.

That UConn (6-0) is using long-range shooting as much as it is qualifies as surprising to some. The Huskies’ identity has been as a defense-first outfit under coach Dan Hurley, getting offense from its defense and relying on scoring in the lane or via penetration.

But this UConn team has more shooters than Hurley has ever had, and it showed all of them off against Oregon, hitting 45.9 percent from the beyond the arc. East Carolina transfer Tristen Newton drained five in a row at one point in the first half, when he scored 21 of his team-high 23 points.

“Unlike some of our past teams, we can go on runs because we’ve got several guys who can hurt you from the 3-point line,” Hurley said. “We’ve got a good passing team, we’ve got a good shooting team. We put our opponents in a tough spot because we have the two big guys who are a big concern.”

Those would be Adama Sanogo and 7-foot-2 freshman Donovan Clingan. Sanogo averages a team-high 19.8 points and 7.7 rebounds per game, while Clingan is contributing 9.5 points and 6.8 boards per contest. With shooters like Newton and Virginia Tech transfer Naheim Alleyne on the perimeter, the Huskies present a quandary for most foes.

Alabama (5-0) won’t be like most foes UConn has played. In fact, the Crimson Tide will be the first ranked opponent for the Huskies and vice versa. This will be a measuring-stick game for both programs.

Freshman Brandon Miller has injected Alabama with an explosive scoring option that didn’t always exist last season. Miller pumped in 17 of his 24 points in the first half against Michigan State.

Alabama has shown it can outdo the Huskies from deep. It drilled a whopping 21 3-pointers on Nov. 18 when it destroyed visiting Jacksonville State 104-62. Miller had 28 points on just 12 shot attempts in that game, hitting 7 of 9 from long range.

“To take 12 shots and go 3 of 5 from the line and end up with 28 points, that’s going to be as efficient as you’re going to see,” Crimson Tide coach Nate Oats said.

Miller is averaging 21 points and 9.2 rebounds, while Ohio transfer Mark Sears has stuffed the stat sheet, contributing 13.6 points, 5.4 rebounds and 3.8 assists per game. And Sears hasn’t shot as efficiently as he did for two seasons with the Bobcats.

The winner will play for the tournament title Sunday against either No. 1 North Carolina or Iowa State, who meet in a Friday afternoon semifinal.