No. 17 Texas rolls past Incarnate Word in final tune-up for Big 12 play 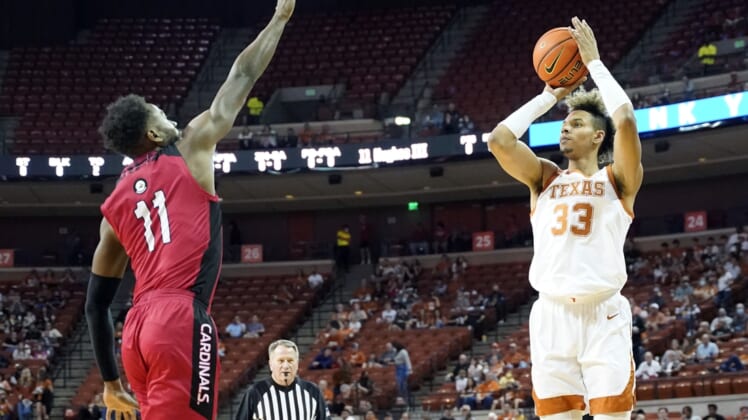 Tre Mitchell and Dylan Disu scored 14 points each to lead a balanced Texas attack as the 17th-ranked Longhorns produced a near-walkover in their final warmup for Big 12 Conference play with a 78-33 win over visiting Incarnate Word on Tuesday in Austin, Texas.

The Longhorns (10-2) jumped out to an early advantage and never looked back, leading by 25 points at the half while shooting 53.1 percent from the floor. Texas excelled on defense against the overmatched Cardinals, forcing 18 turnovers and limiting the visitors to just 26.5 percent shooting from the floor.

Twelve players saw the court and 11 of them scored for the Longhorns, who have won four straight games and remain undefeated at home. Both those streaks will be in jeopardy when Texas hosts West Virginia on Saturday to open conference play.

Texas has now kept seven of its first 12 opponents below 50 points and continues to lead the nation in scoring defense.

Texas dominated from the opening tip, scoring the game’s first seven points and running out to a 23-6 lead at the 6:31 mark of the first half. The Longhorns were actually even better over the remainder of the half, rolling through a 16-8 run and taking a 39-14 advantage to the break.

Incarnate Word didn’t make a two-point basket until the final 38 seconds in the half.

Ten Texas players scored in the first half, led by Courtney Ramey and Jase Febres with 6 each.