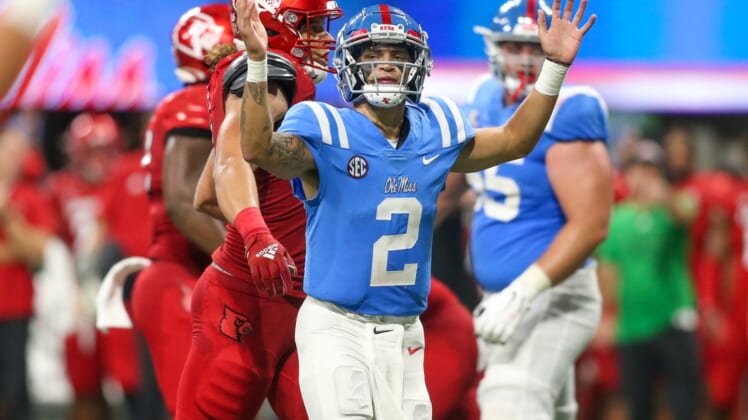 Ole Miss is chasing its best start to a season since 2015, but head coach Lane Kiffin’s squad just is striving to zero in on Saturday.

The No. 17-ranked Rebels (2-0) play their second straight home game Saturday night when they host Tulane (1-1) of the American Athletic Conference in Oxford, Miss.

The consistent explosiveness of Kiffin’s offense and improvement by the Ole Miss defense led to convincing wins over Louisville and Austin Peay.

Ole Miss is fourth in the FBS in total offense with 599.5 yards per game — trailing Memphis, UCF and Arkansas State — and is tied at seventh with Memphis in scoring offense at 48.5 points per game.

Those numbers might exceed expectations. There’s no doubt the improved defense is raising the bar.

A unit that struggled last season to keep points off the board despite its high-powered offense and quarterback Matt Corral lighting it up from end zone to end zone has yet to appear in 2021.

In 2020 during its 5-5 regular season in the SEC West, Ole Miss’ defense finished 126th in the FBS — next to last and only ahead of North Texas — by surrendering a staggering 519 yards per game.

The Rebels are 73rd through two games, allowing 358.5 yards per game.

By winning its first two contests, Ole Miss has a chance to start a season with three wins for the first time since Sept. 19, 2015, when the Rebels went to Tuscaloosa to face second-ranked and eventual national champion Alabama.

That 15th-ranked Ole Miss squad — led by head coach Hugh Freeze, quarterback Chad Kelly and defensive standouts Robert and Denzel Nkemdiche — built a 30-10 lead in the third quarter and held off a late charge by the Crimson Tide in a massive upset.

“[Tulane] is a really good team that’s talented and well coached – and that’s not coach-speak,” Kiffin said Monday. “These Alabama and Louisiana schools have a lot of players that are in-state. They can’t all go to Alabama, Auburn or LSU.

“I told our team today that if you don’t know about conferences and just watch film and watch them play, this is an SEC opponent.”

Kiffin cited the Green Wave’s tough opener in Oklahoma – originally scheduled to be played in New Orleans but relocated to Norman due to Hurricane Ida — when they were driving to take the lead late against the then-No. 2-ranked Sooners.

Tulane turned the ball over on downs after a desperate scramble by quarterback Michael Pratt, allowing OU to escape with a 40-35 road win on its home field and avoid the embarrassment of the season’s first major upset.

“That was one of the hardest hitting teams, one of the most physical teams I’ve played,” Sooners quarterback Spencer Rattler said of the Green Wave.

In its home opener last week, Tulane scored 52 points in the first half and trounced Morgan State 69-20.

The squad put up 584 yards of offense and held the visiting Bears to 228.

Tulane is sporting a special helmet decal this week that reads “SEC CHAMPS 34 39 43” – the three seasons it won the conference championship as a member from 1922 to 1965 before going independent.

The Rebels lead the all-time series against Tulane by a 70-15-2 margin and have won 11 straight meetings dating back to 1989.

Ole Miss is 12-2 against the Green Wave in games played in Oxford.