No. 17 Arkansas looks for better defensive effort against Auburn 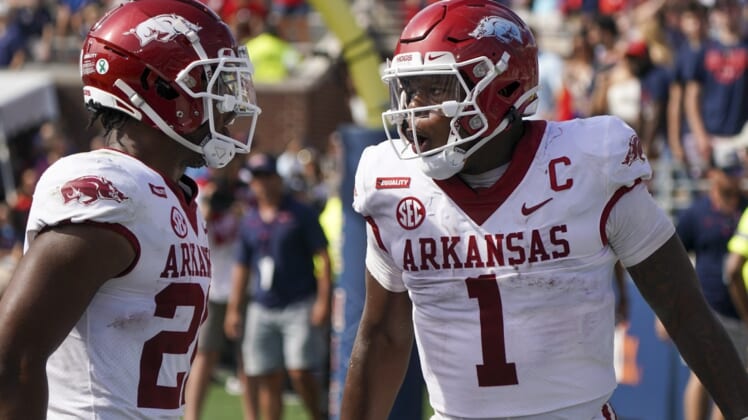 Arkansas has found its offense, but the defense has let down the Razorbacks the past two games.

Coach Sam Pittman’s Razorbacks (4-2, 1-2 SEC) lost on the final play to then-No. 17 Ole Miss on the road Saturday — their second straight loss and one that kept them from starting a season 5-1 for the first time since 2011.

Pittman elected to ride the hot hand of quarterback KJ Jefferson, who tossed a 9-yard touchdown pass to Warren Thompson on the final play of regulation to pull the Razorbacks within 52-51.

With Jefferson rolling and the Rebels reeling, Arkansas went for two and the win, but the Mississippi native’s final pass fell incomplete on the Vaught-Hemingway Stadium turf to leave the visitors with another defeat after being humbled 37-0 at Georgia the previous week.

“Not a very good defensive performance, obviously,” said Pittman after his squad surrendered 611 yards of offense — 324 on the ground — to Ole Miss.

The loss was stinging, but Arkansas regained some offensive form as Jefferson passed for 326 yards and three TDs, ran for three scores and led an offense that produced 676 yards.

“The main thing going in was establishing the run game,” said Jefferson, a sophomore who rushed for 85 yards on 20 carries. “They had a three-down defense and we thought (our) big guys could get to the next level. They just had a light box and we wanted to attack it.”

In the series, Auburn owns an 18-11-1 mark and a five-game winning streak.

The Tigers (4-2, 1-1) got all they could handle last week from then-No. 2 Georgia, which assumed the nation’s top spot with a methodical 34-10 victory on the Plains at Auburn.

But while much of the credit goes to Georgia’s attacking defense, the home side frittered away a number of scoring chances, including two first-half drives that ended inside the 10 and produced just three points.

“We have to finish drives,” Auburn coach Bryan Harsin said. “That’s the most frustrating thing right now. We can drive the field, (but) that doesn’t matter if you can’t put points on the board. …

“Can we score touchdowns? That gets pretty old when you’re not doing that.”

After engineering some magic in a 24-19 win at LSU two weeks ago, Nix was 21 of 38 for 217 yards and one interception, but Pro Football Focus counted seven drops from the Tigers, giving them an SEC-leading 23 this season.

“The drop issue is frustrating,” Harsin said. “That comes back to the fundamentals of football.”